Uli Kazmaier is Professor of Organic Chemistry at the Saarland University, Saarbrücken, Germany. His resarch focuses on amino acid and peptide synthesis, as well as metall-organic synthesis and catalysis. In his spare time he likes travelling and cooking. Here he presents the recipe for a special edition of a traditional Suebian dish:  “Lentils with Spätzle” which was exclusively created for ChemViews magazine.

What was your first experiment?

To be honest, I do not remember exactly. But probably it was something with potassium nitrate, sulfur and charcoal.

When was the last time you did an experiment in the lab – and what was it?

It must be more than 10 years ago. My last experiments were dealing with stereoselective peptide modification.

What is the most exciting experiment you did?

Probably this was the observation that PPh3 catalyzes the isomerization of activated triple bonds to conjugated dienes. This was during my postdoc time in the Trost labs around 20 years ago. This was “only” a control experiment, because originally I wanted to investigate Pd-catalyzed alkyne couplings. At that time nobody was talking about organocatalysis, but in the meanwhile phosphine-catalyzed reactions are quite popular. Another exciting observation was the development of the chelate-enolate Claisen rearrangement.


What was your biggest experimental mishap?

So far, I am very happy that nothing really life-threatening happened, except a few quite impulsive ozonolyses. But luckily, I was out of the lab when they ran out of control.

What advice would you give up-and-coming scientists?

Or what was the best advice you have ever been given?

It would recommend them to start their academic career with a well balanced mixture of some kind of mainstream chemistry (to get publications and citations in the well known journals) and really new own ideas, to create their “own chemistry”. Of course this is much more difficult than riding the wave, but also much more satisfying. 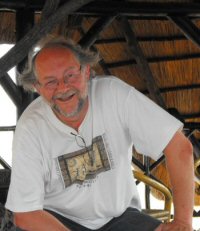 Please give some personal remarks why you chose this one.

“Linsen mit Spätzle” is a traditional Suebian food, some call it the national food of Suebia, the area where I come from. The Suebians live in the southern part of Germany, close to the Bavarians, and are known to be really economical. Therefore, the original and traditional meal has nothing to do with the recipe described here. This is a special edition created for “What’s Cooking in Chemistry?”


If you were having a dinner party and could invite somebody, past or present, who would that be – and why?

Charles Darwin, Alexander von Humboldt, Albert Einstein, and, if he has time, Leonardo da Vinci. I think, this evening would definitely be not boring.


Would you like to give some advice on cooking?

What was the best advice you have ever been given?

Not really. A good chemist in general is also a good cook, because he likes to do experiments and tries new things and reactions. Ergo, to a good chemist you do not have to give advice. And to bad chemist …

The preparation of the lentils can be run as a one-pot reaction using a 8 L reactor. To reduce the reaction time an autoclave can also be used.

The bacon is cut into small slices and the onions into small cubes. The bacon is heated in the reactor to around 200 °C until it becomes crispy. The onions are added and are roasted in the fat running out from the bacon until they are brown. At that point the ground meat is added and heating is continued under vigorous stirring until the meat gets brown.

The reaction mixture was hydrolyzed before the bouillon cubes, cloves, laurel leaves and the lentils were added. The reaction vessel was closed and heated under reflux until the lentils become soft. Depending on the lentils used this might take 30–90 min, in general the reaction should be over after 1 h. During that time the reaction mixture is getting thicker and thicker, becoming some kind of “Mumpe”. Therefore, stirring is important to avoid carbonification. On demand, please add additional H2O to keep the Mumpe stirrable. When the lentils are soft, the crushed tomatoes can be added. Add vinegar, salt and pepper to your taste.

If the lentils are soft, in principal the meal can be served, what is the general procedure. But this meal is getting better from day to day. In general, it is run as a large scale reaction and there should be some left over. If you reheat it the next day, and the day after, it is getting better and better, becoming more and more a Mumpe. Probably you should serve it to your guests two days after preparation.

If you want to prepare “lentils original style” just forget to add ground meat, bacon, onions and the crushed tomatoes.

Preparation of the Spätzle:

The wheat flour was placed in a bowl-shaped mixing vessel. The eggs, after removal of the shells, were added, followed by the salt and H2O, which is added in portions. The whole mixture is homogenized using a “Spaetzlesloeffel”, a wooden spatula with a hole in it (see picture). The resulting dough is beaten with the spatula until bubbles are coming out.

The spaetzle will become stronger if you replace some of the weath flour (100 g) by bread crumbs.

H2O is heated in a 8 L reactor under reflux before salt is added. The spaetzles-dough is filled in portions into a spaetzlespress, some kind of giant garlic press. Under pressure, the dough is injected into the boiling diluted brine solution. First the spaetzle sink, but they will come back to the surface after a few minutes. At that point you can remove them using a scooping iron and collect them in a sieve. After washing with water, the spaetzle are placed on a plate and covered by the lentils.

In the original version (without the meat, …) this meal is served with “Seitenwuerstchen”, some sausages comparable to Wiener.

Excessive consumption of this food might result in the formation of huge volumes of biogas, which might destroy the ozone layer.

Uli Kazmaier studied chemistry at the University of Stuttgart where he obtained his diploma (1985) and his PhD (1989) under the supervision of U. Schmidt. Afterwards as a postdoc, he joined the research groups of M. T. Reetz (Marburg) and B. M. Trost (Stanford). In 1992, he moved to Heidelberg starting his own scientific work as an habilitand at the Institute of Organic Chemistry with his mentor G. Helmchen. After his habilitation in 1997 he became a private docent at the same University, and from 1999 to 2001, a substitute chair in Karlsruhe. In 2000 he received an offer for a full professorship at the University Bayreuth and, in 2001, from Saarland University, which he accepted. In 2006 he received a call for a chair at University of Heidelberg. His current research interests extend to new organo-metallic reagents and reactions, especially for amino acids and peptide synthesis. Besides the development of new synthetic protocols, the application of these new reactions towards the synthesis of natural products and other pharmaceutical relevant structures plays a major central role in his research.

The idea to show what top scientists like to cook – on the bench and on the stove – is taken from the very successful book: