Singlet oxygen has many potential applications, including photodynamic therapy and photochemical synthesis. However, its controlled generation remains a challenge. Hong-Cai Zhou and his team,Texas A&M University, College Station, USA, identified photochromic switches as a suitable control unit, and realized that a metal-organic framework (MOF) would be the best structure in which to incorporate them, as MOFs have strong coordination bonds so the network structure will be retained upon photoisomerization, and they are porous, so the functional subunits are accessible to external reactants.

The photochromic nature of the frameworks was demonstrated by the reaction of BPDTE, a colorless tetratopic carboxylate linker (DBTCB), and zinc(II) ions in a solvothermal reaction. The colorless single crystals of PC-PCN (open BPDTE) turned blue when irradiated with UV light (closed BPDTE), and back to colorless when irradiated with visible light.

Having established the reversible photochromic nature of the framework, BPDTE was combined with tetrakis(4-carboxyphenyl)-porphyrin (TCPP) and zinc(II) ions. Purple crystals of SO-PCN were formed. The open form of BPTE could be used to generate singlet oxygen, which was confirmed by experiments using a scavenger molecule. 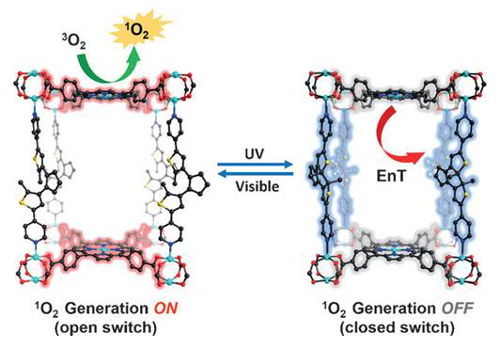 SO-PCN could also be used as the catalyst in a singlet oxygen mediated photooxidation reaction. These materials have potential applications in areas such a photocatalysis and photoswitching.