ChemistryViews.org – a new era for ChemPubSoc Europe and Wiley

ChemPubSoc Europe and its publisher, Wiley-VCH, have launched a new online service – ChemistryViews.org. ChemistryViews is a comprehensive free-to-view news and information site with an associated magazine, ChemViews. The new site enhances ChemPubSoc Europe’s and Wiley-VCH’s already market-leading position as a publisher of peer-reviewed content by adding news, commentary, opinion and additional feature material from leading authors to offer the global chemistry community a complete information service.

ChemPubSoc Europe is an organization of 16 European chemical societies with approx. 85,000 members, and in partnership with Wiley-VCH publishes some of the most respected publications in chemistry. It was founded on the initiative of the Gesellschaft Deutscher Chemiker (GDCh, German Chemical Society), the owner of the flagship journal Angewandte Chemie. Wiley-VCH also publishes industry-leading books and journals in this market, and this partnership gives unparalleled access to the best authors and scientists, and an impressive market reach to chemists worldwide.

ChemistryViews.org is designed to address the information needs of this global community. Uniquely presenting its content through both a subject channeled approach as well as a thematic view, the site allows chemists to quickly and logically drill-down to focused content in their field, and to easily access related material, both free to view and peer-reviewed. Logical site navigation has long been cited as a key requirement by scientists eager to find and browse content quickly, and a research project into user needs has driven the interface and information structure of the new site. 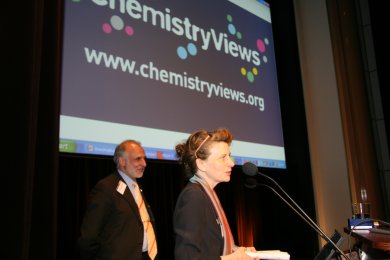 A key driver for ChemistryViews is to act as the information outlet for reaching authors. Articles provided for the launch include:

And of course there is much more to find, with content being updated regularly.

There is so much good information on ChemistryViews – I am looking forward to receiving the first newsletters to keep informed about what is new on the site,” a reader said to the Editors.

ChemistryViews.org will be developed continuously according to the needs of its users. The first feature upgrade of the platform is already planned for August, and a suite of advanced features, alerting services to new peer-reviewed content and video blogs are planned for early release.

ChemistryViews was launched at a major gathering of world-leading chemists in Paris on May 21, an event streamed live to a global audience in what was a first for the chemistry community. The Frontiers of Chemistry event celebrated 10 years of the major ChemPubSoc Europe journals ChemBioChem and ChemPhysChem and brought 10 world-renowned speakers, including four Nobel laureates, to the Maison de Chimie.

The event was broadcast live over the internet through a virtual event platform. The platform allowed participants to view the speakers and their presentations as well as to download additional material and communicate with other participants. Presentations from Nobel Laureates included Gerhard Ertl, who won the Nobel Prize for Chemistry in 2007, Jean Marie Lehn, who won in 1987, Roger Tsien, winner in 2008, and Ada Yonath, winner in 2009. These were joined by six prestigious chemists, Luisa de Cola, Alan R Fersht, Marc Fontecave, Michael Grätzel, Michel Orrit, and Nicolas Winssinger, to present on some of the leading research areas in the field.

Over 4000 participants registered for the live broadcast of the virtual event. “This is amazing – so many great presentations. Seeing the speaker and his slides next to each other makes it so easy to listen and understand what he is talking about,” said one participant. An archive of the event is available from the ChemistryViews site.

ChemPubSoc Europe is an organization of 16 continental European chemical societies, founded in the late 1990s as a consequence of the amalgamation of many chemical journals owned by national chemical societies into a number of high-quality European journals and an online magazine:

All participating societies share a commitment to scientific excellence, to publishing ethics, and to the highest standards in publication, which are the basis for the success of the ChemPubSoc Europe journals. ChemPubSoc Europe has more than 85000 members.

Wiley-VCH, a part of John Wiley & Sons, Inc. since 1996, was founded in 1921 by two learned societies, which later merged to become the German Chemical Society (GDCh), and a trade association. Based in Germany, Wiley-VCH publishes science, technical and specialist information in print and electronic form (books, journals, and data collections) for an international audience of researchers and professionals. Today, the main subjects are chemistry, materials science, life science, and physics, but also extend to business, computing and related fields. While the main language of publication is English, Wiley-VCH also offers a substantial German-language program servicing the needs of the local markets.

From the very beginning, Wiley-VCH has co-operated closely with both the GDCh and a continuously growing number of national and international scientific societies and associations, including ChemPubSocEurope (currently comprising 16 European chemical societies), ACES (its counterpart in Asia), the DECHEMA, the German Physical Society DPG, the German Research Foundation DFG, EMBO, and many more. Wiley-VCH is honored to be the publisher of Angewandte Chemie, which is owned by the GDCh and has been known for years as the world’s #1 chemistry journal publishing original research and reviews. Other publications held in the highest esteem among readers, authors and librarians include such journals as Advanced Materials, Proteomics, and Physik Journal, but also numerous print and online books and encyclopedias, e.g., Ullmann’s Encyclopedia.

Close collaboration with our society partners and the world?s best authors, including nearly all Chemistry Nobel laureates, will ensure that the name of Wiley-VCH will continue to stand for outstanding excellence in publishing for years to come.

Founded in 1807, John Wiley & Sons, Inc. has been a valued source of information and understanding for more than 200 years, helping people around the world meet their needs and fulfill their aspirations. Wiley and its acquired companies have published the works of more than 400 Nobel laureates in all categories: Literature, Economics, Physiology or Medicine, Physics, Chemistry, and Peace.

Wiley is home of publishing for more chemical societies than any other publisher. They include the American Institute of Chemical Engineers (AIChE) and the Society of Chemical Industry (SCI). Wiley’s global headquarters are located in Hoboken, New Jersey, with operations in the U.S., Europe, Asia, Canada, and Australia. The Company is listed on the New York Stock Exchange under the symbols JWa and JWb.