The prize honors Freund’s work in the field of surface chemistry and surface physics, as well as his contributions to the understanding of nanostructures for catalysis and was presented at the General Assembly of the German Bunsen Society for Physical Chemistry (Bunsentagung 2015) in Bochum, Germany, on May 14, 2015.

Hans-Joachim Freund studied chemistry and physics at the University of Cologne, Germany. He received his Ph.D. there in 1978 for work under the supervision of Georg Hohlneicher and completed his habilitation in 1983. Freund was appointed Associate Professor at the University of Erlangen, Germany, in 1983, and Professor for Physical Chemistry at Ruhr-University Bochum, Germany, in 1987. Freund has been Director and Scientific Member of the Fritz Haber Institute, Berlin, Germany, since 1996. He has been involved in founding the Cluster of Excellence “Unifying Concepts in Catalysis” (UniCat), Berlin, Germany, and has also been a founding member of the Scientific Council of the European Research Council.

Among many other honors, Professor Freund has been awarded the Leibniz Award of the Deutsche Forschungsgemeinschaft (DFG, German Research Foundation) in 1995, the Gabor A. Somorjai Award of the American Chemical Society (ACS) for Creative Research in Catalysis in 2007, and the Karl Ziegler Award of the Gesellschaft Deutscher Chemiker (GDCh, German Chemical Society) and the Karl Ziegler Foundation in 2011. He is a Fellow of the American Physical Society, a Fellow of the Institute of Physics, UK, a Member of the German National Academy of Sciences Leopoldina, a member of the International Advisory Board of ChemCatChem, Editorial Board Member of ChemPhysChem, and a member of the GDCh/Wiley-VCH Verlagsbeirat (Publishing Advisory Board).

Professor Freund’s research interests include physics and chemistry of solid surfaces, structure and dynamics of oxide surfaces, model systems for heterogeneous catalysis, as well as nanostructures and clusters. 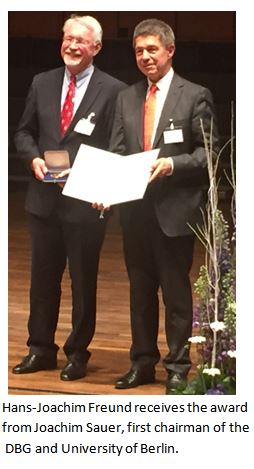