When in September 1860 about 130 chemists from Germany, Europe and even from overseas met in Karlsruhe at the first international congress in chemistry, no less than the future of chemistry was at stake. Ambiguous views on the constitution of molecules and varying use of nomenclature made an exchange of knowledge and thus a productive research impossible. The 1860 congress led to a revision of concepts and to the development of the periodic table of elements by Lothar Meyer and Dmitri Mendeleev only a few years later.

The “150th anniversary Weltkongress Chemie” took place on September 3—4, 2010 in Karlsruhe and aimed to remind us of this eminent historical congress. More than 500 participants, a majority being students, discussed in 10 plenary lectures on the general topic “Progress and Challenges in Chemistry“. The enormous challenges mankind has to face these days, which need to be solved with significant participation of chemistry, are easy to define: Supply of food, clean water, energy, housing space and health care for a steadily increasing world population considering environmental and climate aspects.

Nobel Prize laureate Paul Crutzen (Mainz) expounded the influence of carbon dioxide and other greenhouse gases on climate. He pointed out that a deep understanding of the underlying chemistry permits actions, which reduce or even prevent climatic changes. Ferdi Schüth (Mülheim) and Helmut Schwarz (Berlin) presented how to access basic chemicals when oil is running short: A starting point could be either the abundant but almost inert methane or sustainable products like reeds. These speakers gave an account on very different scientific approaches, making clear that all disciplines in chemistry and in the neighboring subjects have to participate in the solutions of the listed problems.

Andreas Kreimeyer (Ludwigshafen), member of the board of executive directors of BASF SE, summarized how the chemical industry can contribute in facing these global challenges.

Catalysis is increasingly important in processes (e.g. in waste gas treatment) and in the synthesis of bulk and fine chemicals. Nobel Prize laureate Richard Schrock (Boston) gave an overview on his latest catalysts for metathesis and Hans-Joachim Freund (Berlin) reported on the elucidation of processes on the surfaces of catalysts. 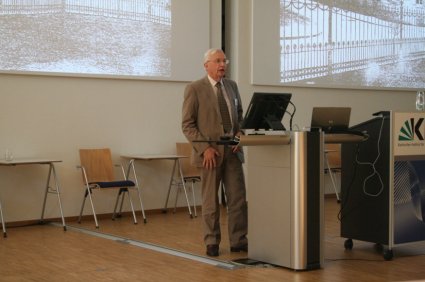 A third Nobel Prize laureate, Jean-Marie Lehn (Paris), presented how designed and selected substances can organize themselves to complex and well-defined structures.

A further main issue of this conference was to shed light on the historical events around the 1860 congress: Alan Rocke (Cleaveland) gave in his lecture „The Chemical Revolution in Karlsruhe“ a detailed overview of the historical congress, which paved the way for the development of the periodic tables shortly after. Carsten Reinhardt (Bielefeld) presented the development of the Deutsche Chemische Gesellschaft (DChG) and later the Gesellschaft Deutscher Chemiker (GDCh) in the aftermath of the congress. Peter Armbruster (Darmstadt) gave a very personal account on how he was able to add 5 new elements to the periodic table of elements, inter alia Darmstadtium and Hassium. Even today, substantial findings in the context of the periodic table are possible, as was pointed out by Pekka Pyykkö (Helsinki): The characteristic color of gold and the liquid state of mercury are due to relativistic effects.

We are very much indebted to the Weltzien family (descendants of the 1860 congress organizer Carl Weltzien) for their generous donation of original letters from their ancestor’s estate, among them letters from the hands of Bunsen, Erlenmeyer, Fehling, Helmholtz, Kirchhoff, Liebig, Pasteur and Wöhler.