With a value of 500,000 EUR, the German Environmental Award of the Deutsche Bundesstiftung Umwelt (DBU) is the most lucrative environmental prize in Europe. There are two winners in 2010, receiving 245,000 EUR, respectively:

The former president of the Soviet Union, Mikhail Gorbachev (79), was awarded a special prize of 10,000 EUR, which has been awarded only twice since the German Environmental Award was first awarded in 1993: to Hannelore “Loki” Schmidt (2004) and Heinz Sielmann (2005).

Dr. Winfried Barkhausen and Edwin Büchter are winning the prize for their mobile laser technology. It cleans technical surfaces with light in an environmentally-friendly manner, while also offering economic advantages and optimising industrial safety. No cleansing agents are used and a reduction of up to 87 % in energy consumption is possible.

Dr. Rainer Griesshammer is awarded because he has given impetus to eco-political solutions and made the issue of sustainability an integral part of everyday life. He personifies the successful work of the Institute for Applied Ecology which he turned into one of the leading institutions for environmental research and advice in the country. He also served in the German Advisory Council on Global Change, in the German consumer safety group Stiftung Warentest, and on the board of trustees of Utopia, the internet portal for strategic consumption. In addition, he gave practical hints on how people could improve their individual carbon footprints in a range of publications.


Mikhail Gorbachev paved the way for a more peaceful world as well as always supported the cause of environmental conservation: if he had not existed, Soviet troops would not have pulled out of Germany, opening up huge natural areas formerly used as military zones. The conservation of these is the responsibility of the DBU subsidiary DBU Naturerbe GmbH. Gorbachev performed great services for international environmental protection, e.g., as patron of the “Green Belt” initiative, as founding president of the environmental organisation Green Cross International, or through the sustainability projects run by his foundation. 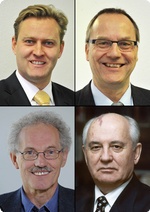