Chemistry and art students together discussed topics relevant to photochemistry research, and the resulting artworks were presented at an exhibition at the TU Munich, Germany.

Six years ago, the DFG graduate research training group on chemical photocatalysis, GRK 1626, was established. The German science foundation (DFG, Deutsche Forschungsgesellschaft) is funding the project, in which approximately 15 principal investigators (PI) and 40 graduate students from several German universities work on joint projects using light—if possible visible light—to drive chemical reactions. The group develops selective chemical photocatalysts for endothermic or kinetically hindered organic reactions and describes the key parameters of their design and function. This will pave the way to a broader use of solar energy for chemical transformations. The results of the group have already been published in more than 100 periodicals over the last few years.

The training group is supervised by several professors, including Professor Burkhard König of the University of Regensburg and Professor Thorsten Bach of the Technische Universität München (TUM).

Light and color can easily be connected to art. That is why Burkhard König and Thorsten Bach had the idea to team up with Professor Birgit Eiglsperger (see picture above, left), who heads the art department at the University of Regensburg, for the art + science project. Besides increasing awareness of scientific research to non-scientists, they anticipated the interaction between doctoral students in chemistry and art students to be an interesting experience for both groups.

Chemists and Artists Working Together

To provide the artists with insight into the research field of photochemistry, a short general introduction was given by the chemistry professors and some of the graduate students. However, most information was exchanged directly between the chemistry graduate students and the art students. They teamed up in pairs to work on a project, met informally several times, talked, and exchanged their ideas and thoughts.

The art students, for example, visited the chemists in their laboratories to get impressions of their daily work and how experiments are run. They not only discussed the goals of their work but also such topics as collaboration and competition among researchers, failure and success, and several others. Later, the chemistry students visited the artists to view the development of their own work and continue the discussions and exchange of ideas.

The artists were students as well as established artists. Photography, etching, painting, and sculpture classes participated in the project. Along with the students, the art docents contributed works of art to the project.

The artworks show a broad range of acpects of photochemistry. Some artists addressed the phenomenon of light and color in their art; others were inspired by the molecular structures. Some focused on the researcher.

To give a few examples, the student Johanna Schuster presented a series of photographs called RGB Technik 2015 (RGB Technology 2015, pictured below). To trigger energy production using light and dye, chemists irradiate different colored, dissolved dyes with different wavelengths of light. Through this process, energy is released. In Johanna Schuster’s work, different surfaces and materials that had been irradiated with different-colored light sources were photographed. She condensed shape and color into tension-filled compositions.

The entire figurative form in Jörg Schmidt‘s painting Lightsurfer (Light Surfer, pictured below) forms a translucent white body that generates light. Light Surfer is an animal, a glowworm for example, that generates clod light by bioluminescence. For this, a particular substance in the presence of a catalyst-enzyme reacts with a source of energy and oxygen. In this process, energy is released, almost exclusively in the form of light, so that there is an extremely high efficiency. The emitted light signals are used by some animalos for communication. The greatly enlarged object in the pinting challenges the viewer to enter into an intensive dialogue with the creature.

Christina Kirchinger’s etching CH-1 (pictured below) shows her fascination for laboratory equipment and experiments. Central objects are more distinct and differentiated, whereas other areas of the subject and the surrounding space are only outlined. This sketchlike character is also found in the actual execution of the piece: The artist is playing with the limits of the format.

Birgit Eiglsperger’s sculpture Wissenschaftlerin (Female Scientist, pictured below) shows a deliberative female scientist who unites forces and counter-forces as statics and dynamics. She points in opposite directions with tightly crossed arms while assuming a wide stance. The hard core of gypsum is covered by a malleable yet rugged surface of wax and paper. 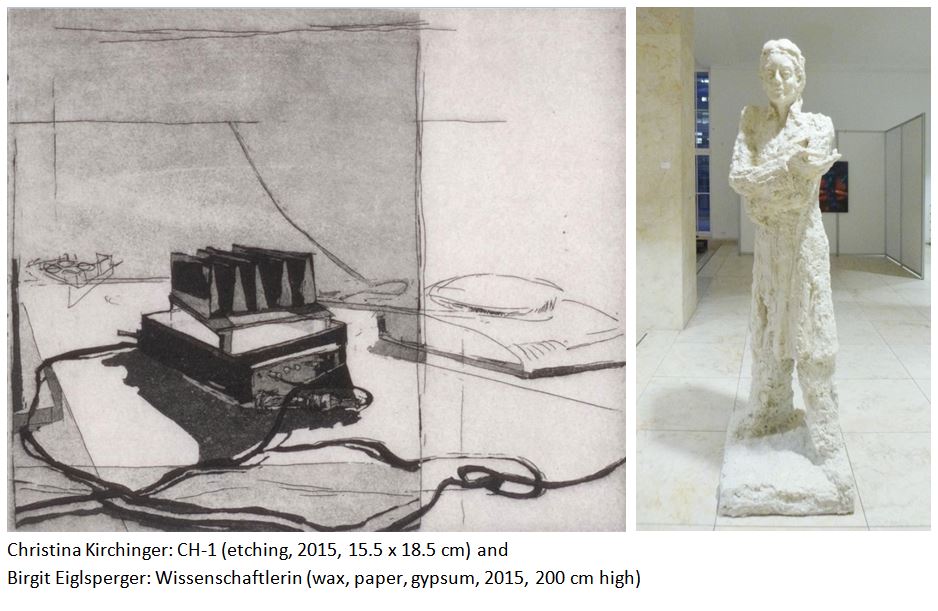 On January 25, 2016 the fine art meets chemistry exhibition opened in the Immatrikulationshalle at TU Munich. Many students and employees of the university visited the exhibition as well as interested members of the public.

At an information evening the presidents of the University of Regensburg and TU Munich both gave a short address followed by more detailed explanations of the exhibition’s scientific and artistic background. It was a very lively event that attracted many visitors. The general feedback was very positive, and the organizers received many encouraging comments to do more projects along these lines.

On the picture at the top Professor B. Eiglsperger (left), Professor E. Lankes, Professor M. Prenzel, chairman of the scientific board, and Professor W. A. Herrmann, President of TUM, look at Marion Aich’s Lichtgewächs (light plant), a plastic (33 cm high) out of wax, glass fiber, and pigments from 2015.

A second exhibition is planned to take place later this year at the University of Regensburg. It is also planned to show the exhibition again in connection with a scientific symposium on photocatalysis. The organizers are hoping for more interest and additional ideas from others.

Professor König and Professor Eiglsperger are also planning a second phase of the project: On the basis of lessons learned from the project, the contacts between students of art and chemistry are to be continued. New events will be offered during the summer semester 2017 at the Institute for Art Education and the results will be shown in exhibitions at the end of 2017. The dates will be announced at: www-oc.chemie.uni-regensburg.de/koenig/index.html and www.kunst.ur.de.

Video impression of the exhibition in Munich (in German and English)