With each carbon-based fuel usage, the atmospheric CO2 levels increase, contributing to global warming. With the global energy consumption expected to double the 2009 level by 2050, we need to not only find renewable energy sources, but also have to combat the CO2 the world currently produces. Capturing this CO2 by electrochemical or photochemical reduction is one approach for this.

Sascha Ott, Uppsala University, Sweden, Somnath Maji, Indian Institute of Technology, Hyderabad, and colleagues have synthesized a series of polypyridyl Ru(II) catalysts (see scheme below) which can electrocatalytically and selectively reduce CO2. Adding a methyl group in the ortho position in the N,N-ligand (positions R2, R3), trans to the MeCN, facilitates the MeCN disassociation and CO2 reduction. 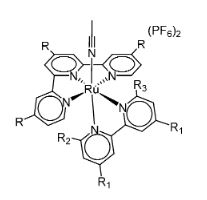 By investigating the interplay between steric and electronic effects caused by ligand modifications within a series of Ru complexes, the researchers have shown the viability of such complexes as highly efficient CO2 reduction catalysts.