Short-circuits in lithium-ion batteries are dangerous because the self-discharge produces heat and can lead to the explosion of the cells. There can be different reasons for an internal short: Over many charge/discharge cycles, lithium dendrites can grow and pierce the thin separator layer. Mechanic deformation and damage to the cell or other device failures can also cause fire or explosions. The cells are flammable because they most often use a liquid electrolyte, with a lithium salt in an organic solvent.

Ping Liu, University of California San Diego, La Jolla, USA, and colleagues have developed a nanocomposite separator to prevent short-circuits. Like the Roman god Janus, the nanocomposite separator has two different faces: One layer is electronically insulating and faces the anode. The other layer has a tunable partial electronic conductivity and faces the cathode. Both layers allow lithium-ion migration between the electrodes.

The researchers prepared the Janus separator layers by casting a solution of poly(vinylidene fluoride-co-hexafluoropropylene) (PVdF-HFP) copolymer and fumed silica. This leads to a polymer gel electrolyte that is conductive to lithium ions but electronically insulating. The electronic conductivity of the gel can be tuned by adding various amounts of multi-walled carbon nanotubes (CNTs), which form a network within the polymer. Layers with different CNT contents can be applied one after another to achieve the Janus design.

With this design concept, the team can physically intercept lithium dendrite growth. In case a short-circuit happens anyway, the separator allows a slow draining of the battery capacity (pictured below in comparison to a single-layer separator). This is due to the increased short-circuit resistance by the partially electronically conductive side, which keeps the electronic current low. A sudden discharge leading to dangerous self-ignition of the battery is, thus, prevented. Instead, the discharge takes place during several cycles with no temperature rise. This work could open possibilities for safer lithium-ion batteries. 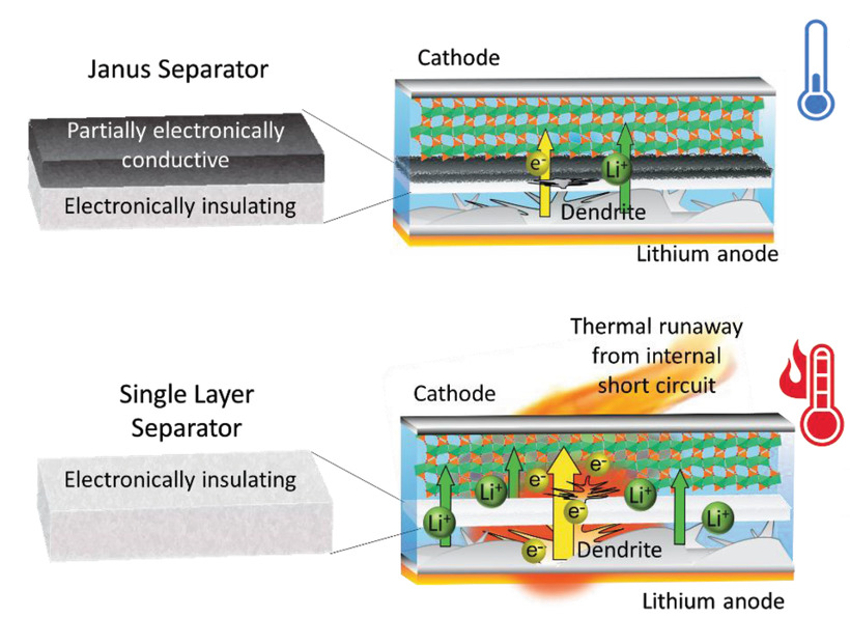