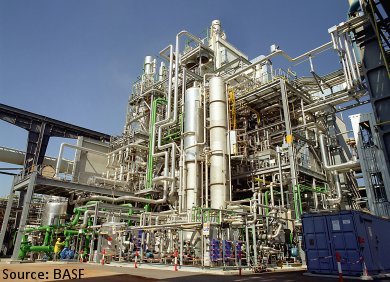 Methanesulfonic acid is manufactured in a continuous process by a method developed and patented by BASF. The final distillation process ensures that methanesulfonic acid produced by BASF has a very high degree of purity. MSA by BASF is supplied as a 70 % aqueous solution under the brand name Lutropur® MSA. Anhydrous MSA is available under the brand name Lutropur® MSA 100.

BASF customers apply the acid in industrial and household detergents and also in galvanic baths for circuit board and tinplate manufacture, among other applications. MSA is also used in the pharmaceutical and chemical industries as an element of synthesis and as a catalyst.