Ammonia is a very important compound in the chemical industry. Besides its use in fertilizer production, it can, for example, also serve as a carbon-free fuel. The activation of ammonia can sometimes be achieved by transition-metal complexes, for example, via hydrogen atom transfer (HAT) reactions. Some main-group compounds can also activate small molecules such as ammonia—e.g., certain carbenes, carbene analogues, or frustrated Lewis pairs. However, a metal-free ammonia activation via a HAT reaction had not been known so far.

Gregory H. Robinson, The University of Georgia, Athens, USA, and colleagues have found that a carbene-stabilized dithiolene zwitterion (pictured above, Dipp = 2,6-diisopropylphenyl) can activate ammonia via a process that involves both single-electron transfer (SET) and HAT reactions. The zwitterion was reacted with NH3 at room temperature in toluene, resulting in a mixture of a radical product that forms purple crystals (pictured below on the left) and a second product that forms colorless crystals (pictured below on the right), as well as H2S as a byproduct. 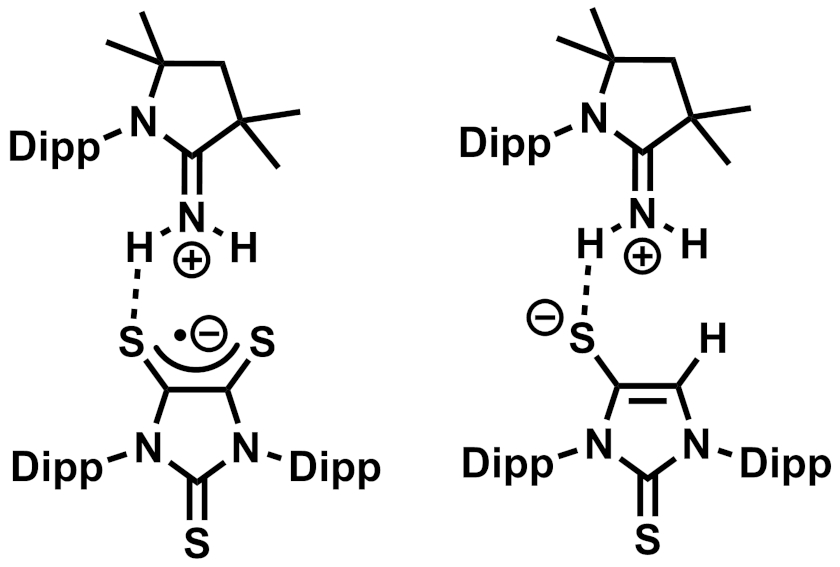 The team proposes that the dithiolene could act as an electron reservoir and accept one electron from ammonia via SET, forming an anionic dithiolene radical. This is then followed by dissociation of the carbene. The free carbene can react with the NH3•+ created from ammonia in the SET reaction, forming the observed carbene=NH2+ adduct. The released hydrogen atoms can take part in HAT processes, forming the second observed product and releasing H2S as a byproduct. The researchers propose that this bifunctional system composed of a dithiolene and a carbene could be useful in other activations of small molecules.