Nitrogen dioxide is a major air pollutant formed during the combustion of fossil fuels. It is a health hazard due to its toxic effects on the lungs and endangers the environment by forming acid rain and polluting soil and water with an excess of soluble nitrogen compounds. Currently, it is removed by catalytic treatment of exhaust gases, but this process requires expensive metals and a lot of energy. Therefore, capturing the NO2 and using it directly for the synthesis of value-added products containing nitro-groups would be highly useful because it would simultaneously prevent NO2 pollution and reduce the use of nitric acid produced with high energy input.

Martin Schröder and Sihai Yang, University of Manchester, UK, and colleagues were able to efficiently capture NO2 at high and low pressure, and under dry and wet conditions in a stable metal organic framework (MOF). This material, abbreviated as Zr-bptc, consists of an organic linker, 3,3’,5,5’-biphenyltetracarboxylic acid (H4bptc), and zirconium-based clusters of the composition {(Zr6-(μ3-O)4(μ3-OH)4(COO)12} (pictured above).

The material was thoroughly characterized both in the free and NO2-loaded state. Isothermal adsorption experiments showed a very high NO2-uptake superior to materials described earlier. Analysis of synchrotron X-ray diffraction data indicated that three different binding sites are present (pictured above), two for NO2 and an additional one binding N2O4. Low-temperature electron paramagnetic resonance (EPR)-studies further confirm the presence of adsorbed monomeric NO2.

The NO2-loaded Zr-bptc was next used in the nitration of various aromatic substrates in chloroform (example pictured below). The reaction proceeded at 0 °C or room temperature and provided the target products in high yields between 85 and 98 % after only 0.5 to 1 hours. The Zr-bptc was successfully recycled three times. 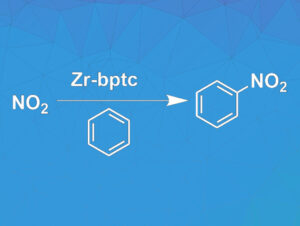 trates for the safe and fast synthesis of nitro-group containing fine chemicals, the new material holds large potential for the efficient use of reactive nitrogen-containing waste as a valuable raw material.