Peptides have structural and catalytic functions in Nature. They are essential for life. However, understanding their formation at the origin of life is challenging. The condensation of amino acids requires that thermodynamic and kinetic barriers are overcome.

Oliver Trapp, Ludwig Maximilian University Munich, Germany, and colleagues have discovered a prebiotically plausible path to peptide formation that is mediated by reduced iron, activated by acetic acid (pictured below). The team investigated this peptide synthesis in water and liquid SO2 by performing reactions of iron powder, amino acids, acetic acid, and urea as an additive. (SO2 is emitted by volcanoes, and it is conceivable that elevated atmospheric pressures on early Earth enabled its condensation.) The peptide products were characterized using tandem mass spectrometry (MS/MS) 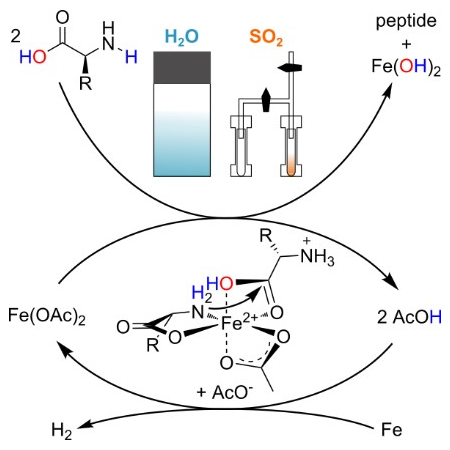 The team observed up to four condensation steps per peptide chain in both water and liquid sulfur dioxide. They found that in liquid sulfur dioxide, peptides are formed at mild reaction temperatures, and all proteinogenic amino acids are incorporated into dipeptides. Since reduced iron compounds were abundant in the anoxic environment of early Earth, the presented route might be applicable to various prebiotic scenarios.