Carbodiphosphoranes (CDPs) are carbon(0) compounds with two PR3 ligands. These compounds feature P→C donor–acceptor interactions, and as a result, the carbon atom retains two lone pairs of electrons. This type of compound is called a carbone.

The synthesis of similar zero-valent group 14 species of the heavier elements (i.e., silylones, germylones, stannylones, and plumbylones) has garnered some research interest. There are examples of monoatomic Si(0), Ge(0), and Sn(0) complexes. However, a zero-valent lead compound, or plumbylone, had remained elusive so far. The synthesis of plumbylones is challenging due to their intrinsic lability. 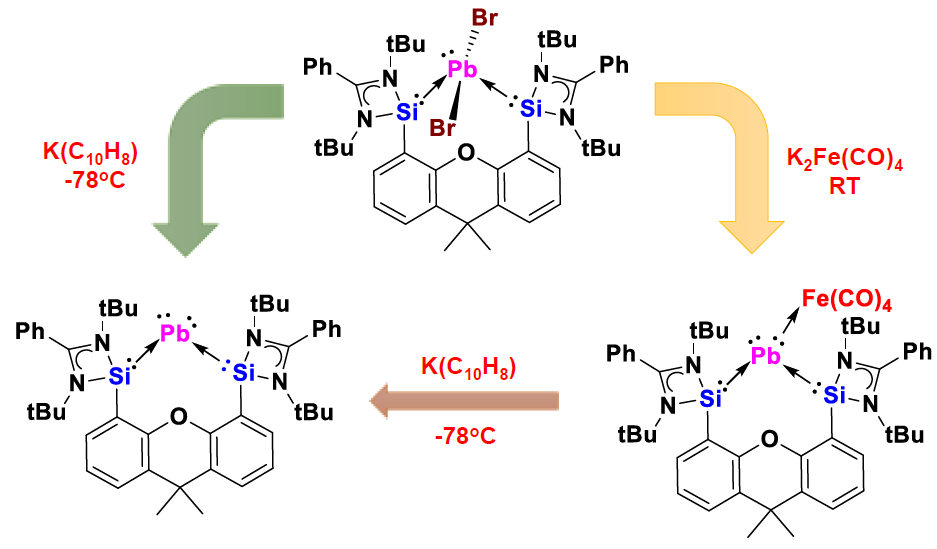 The team started from a lead dibromide precursor and used KC10H8 and K2Fe(CO)4 as reducing reagents, respectively, to obtain the plumbylone and its complex. Density functional theory (DFT) calculations confirmed the presence of two lone pairs at the plumbylone’s central Pb(0) atom. In contrast with the lighter Si(0), Ge(0), and Sn(0) homologues, the Pb(0) complex is extremely labile even at –60 °C. In contrast, the carbonyl iron complex is relatively stable and “bottleable”.