New and efficient photosensitizers for photodynamic therapy (PDT) can be helpful in cancer treatments. PDT requires a combination of photosensitizers, light, and oxygen to produce reactive oxygen species (ROS), which can cause cell death. However, because of aggregation-induced quenching (ACQ), traditional photosensitizers often have a low ROS production efficiency and weakened fluorescence, which is not well-suited to PDT. They are also always in the “on” state and generally lack targeted activation at a tumor site. New photosensitizers with higher photosensitivity and a target-specific response could, thus, be useful for tumor imaging and PDT.

Jishan Li, Hunan University, Changsha, China, and colleagues have designed an aggregation-induced emission (AIE) photosensitizer (TPE-TThPy, pictured) that is activated by the tumor biomarker MAO-A for the highly specific imaging and treatment of tumors. AIE-type photosensitizers can exhibit greatly enhanced photosensitivity in the aggregated state. Monoamine oxidases (MAOs) are enzymes with two known forms in humans (MAO-A and MAO-B). MAO-A is overexpressed, e.g., in cancerous tissues. TPE-TThPy consists of a tetraphenylethylene (TPE) unit, which is used as the electron donor, a thiophene linker as a π-bridge, and tetrahydropyridine (ThPy), which can be converted to methylpyridine salts, as the electron acceptor. 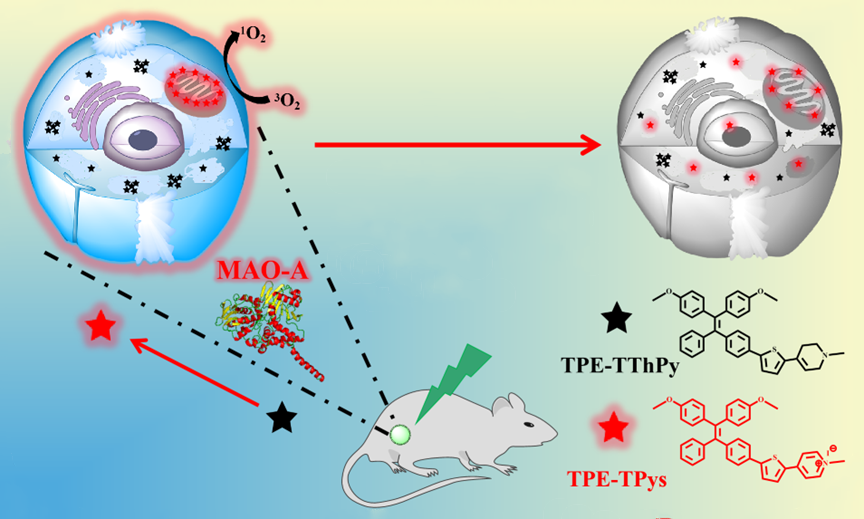 In the presence of MAO-A, TPE-TThPy can be converted into TPE-TPys (pictured in red), which “turns on” the photosensitivity. The team observed high specificity of this effect in MAO-A-overexpressing tumor models, which could make the new photosensitizer useful for specific imaging and therapy.