Antibiotic resistances are a growing health threat, and new antibiotics are urgently needed. Most new antibiotics in the past decades have been based on or derived from natural products. For example, phenolic bisabolane sesquiterpenoids isolated from marine sediment—such as 1-hydroxyboivinianin A (pictured)—show activity towards numerous pathogens. 1-hydroxyboivinianin A has a reported narrow-spectrum antibacterial activity against the aquatic pathogen Vibrio harveyi.

William Wuest and colleagues, Emory University, Atlanta, GA, USA, have synthesized 1-hydroxyboivinianin A and investigated its antibacterial and antifungal activity. The team started from commercially available 2-bromo-5-methylphenol, which underwent benzyl protection. Treatment with n-BuLi and tetramethylethylenediamine, followed by the diastereoselective addition of a chiral imidazolidinone gave a bicyclic aminal intermediate. Hydrolysis of the aminal then led to a benzylic tertiary alcohol (pictured below on the left). An intramolecular Horner-Wadsworth-Emmons reaction was then used to build the lactone. Finally, benzyl deprotection and olefin hydrogenation gave the desired product. 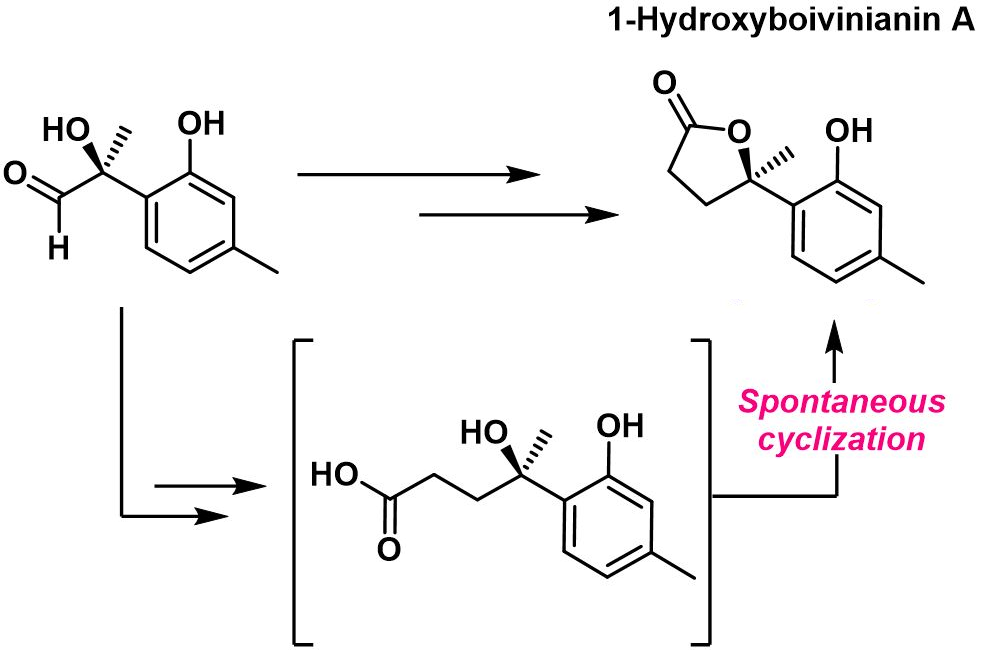 The team completed the total synthesis of 1-hydroxyboivinianin A and its enantiomer in a six-step sequence and in 42 % overall yield. Having obtained the natural product, the team also investigated the active species of the lactone, checking whether the lactone was hydrolyzed in vitro. They found that a spontaneous cyclization of the corresponding linear acid (pictured above) can occur—suggesting the lactone’s resistance to hydrolysis.

Both enantiomers show negligible activity against a small panel of gram-positive and gram-negative bacteria, but they demonstrate some antifungal activity against a panel of phytopathogenic fungi. The work could provide useful insights into the synthesis of lactone-containing phenolic bisabolenes and their activity.