As we hear continuously in the media, Europe is facing great uncertainty regarding gas supplies, and at the same time, energy costs and raw materials prices are rising enormously. This is to a great extent related to Russia’s ongoing war against Ukraine.

Natural gas consists primarily of methane. Hardly any other industry needs as much gas as the chemical industry. They use about 25 to 50 % of the natural gas as a raw material, while the rest is used to generate steam and power for plants and processes.

This Clever Picture explains what makes natural gas so special among fossil raw materials for the chemical industry.

1    Raw Material for the Generation of Chemicals

Natural gas is used as a raw material for many important base chemicals. Ammonia and methanol are the most important. Other typical raw materials for base chemicals such as methanol, ethylene, and propylene are oil/naphtha, biomass, and coal.

Let us first look at how hydrogen is produced. 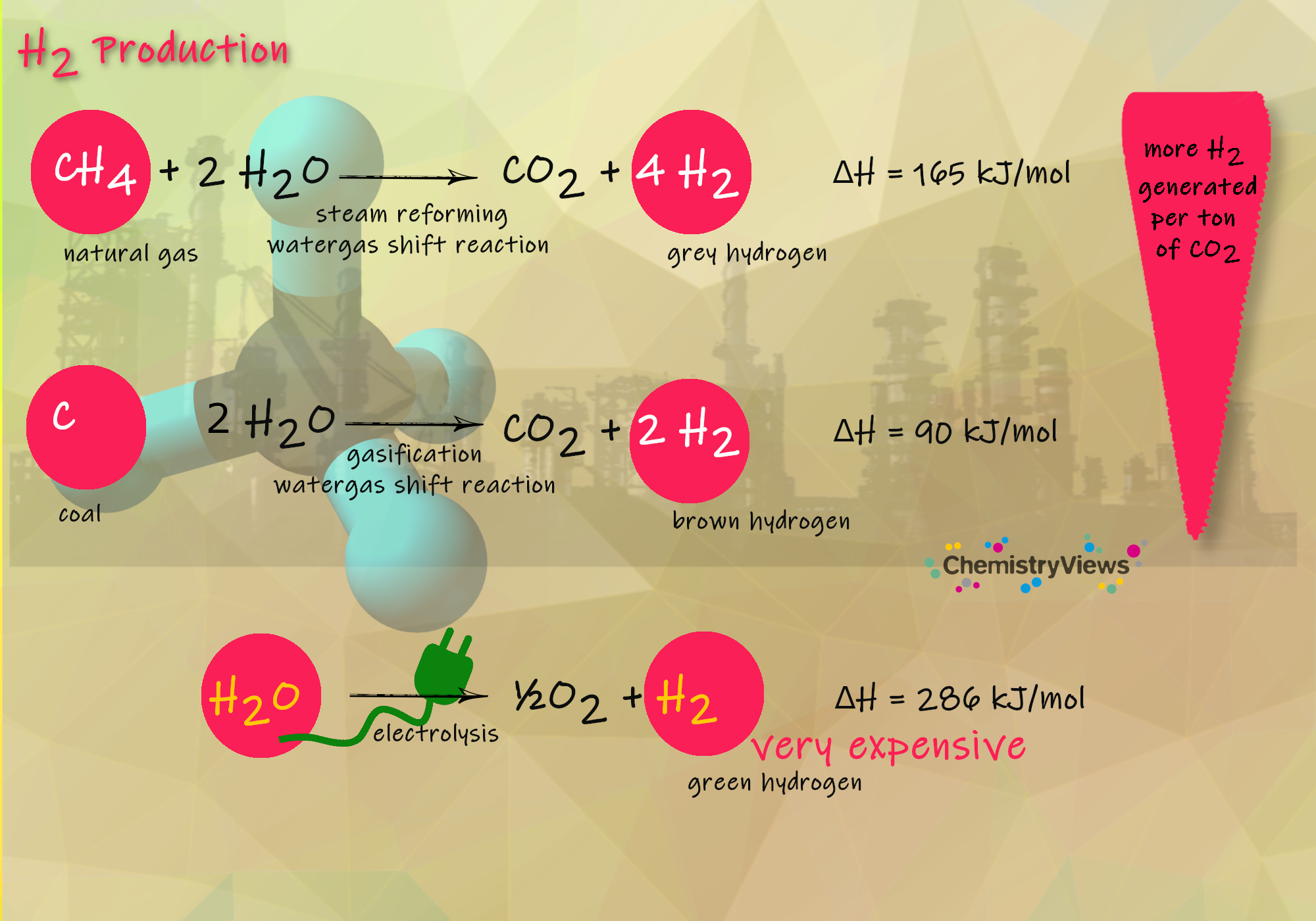 Both fossil-based reactions generate the desired product hydrogen as well as carbon dioxide. Using coal as a feedstock, you get only half as much hydrogen per carbon molecule used as with steam reforming of methane. Both processes produce a lot of CO2, but CH4 is the relatively much better feedstock.

Currently, steam reforming of natural gas produces most of the hydrogen available worldwide. Hydrogen is used, for example, in the industrial synthesis of ammonia and other chemicals. Hydrogen might also become essential for sustainable energy-carrier and energy-storage applications in the future.

This is much more complex—let us look at a strong simplification. 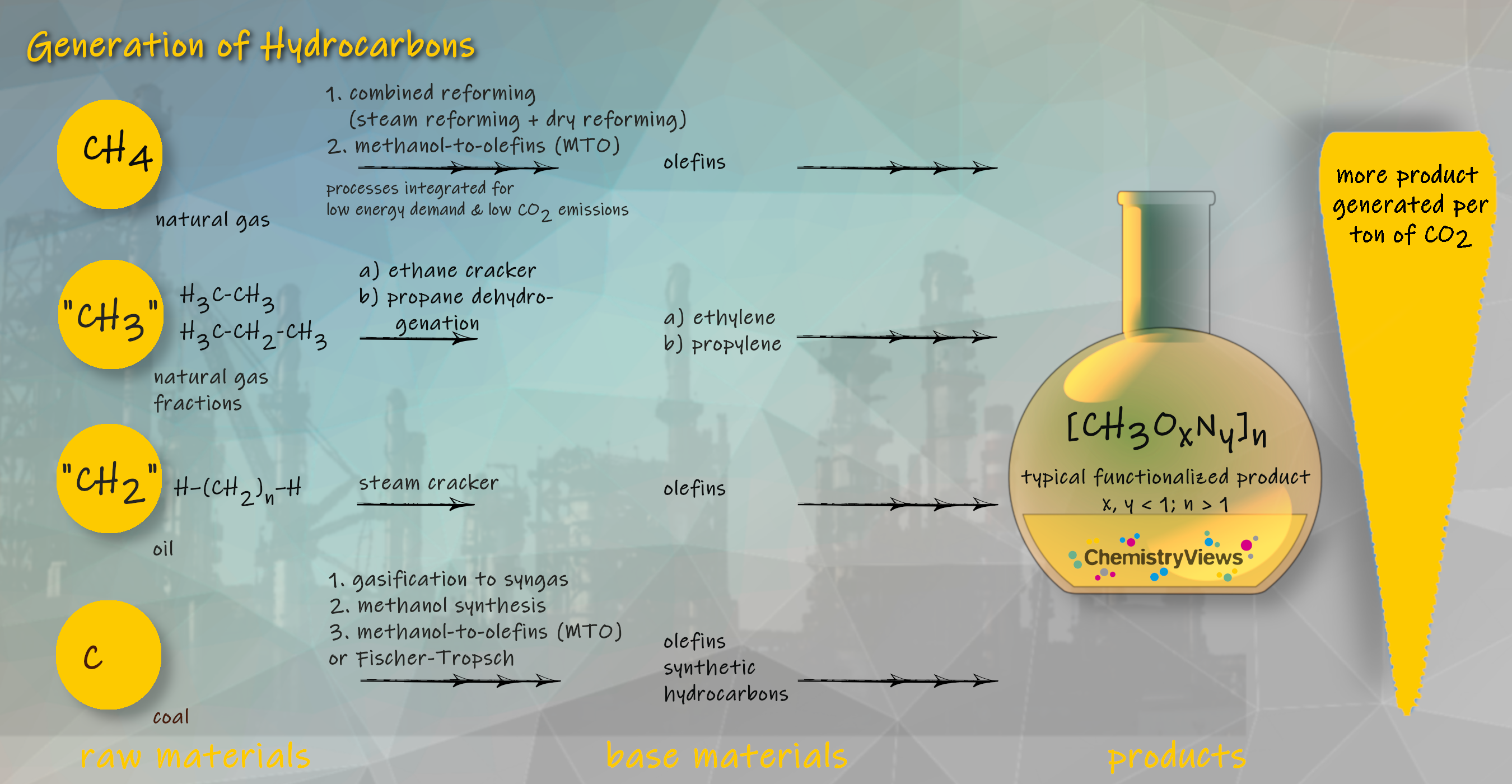 The same principle applies here: With higher hydrogen content in the hydrocarbon raw material and thus higher energy content, the conversion can generate less carbon dioxide. However, this also depends on operating conditions (e.g., coking which increases energy demand) and the use of reaction byproducts (e.g., flue gas, hydrogen). With new recycling processes and the use of biomass, there are various potential alternative ways to secure the future raw material base.

2. Generation of Energy for Plants and Processes

Fossil resources are also the main raw material for energy generation via the production of power and steam. The necessary (re-)processing steps for energy production vary in complexity for different fuels. Coal, for example, requires a complex flue gas cleaning system, while methane combustion is relatively clean. As methane has the highest energy content, it produces the least amount of carbon dioxide per kilojoule of energy.

Looking at future emission reduction pathways, the chemical industry could gradually replace natural gas in the coming decades by electrifying processes and gradually switching to climate-neutral or renewable gas and hydrogen.

There are no quick fixes, but there is hope that this crisis will accelerate the industry’s shift away from fossil fuels to green power. However, the challenge is to accomplish such transformation while remaining competitive. In addition, such a transformation requires extremely high amounts of capital expenditures.

In this respect, CH4 has been a particularly favorable fossil feedstock in Europe. It releases CO2 during its conversion, but less than when using coal or petroleum as feedstocks. This allowed Europe to remain fully competitive and still reduce CO2 emissions. However, as methane is even more damaging to the climate than CO2, a prerequisite for this consideration is that there are no major methane losses during extraction and transport.