This year, ChemPubSoc Europe distinguishes 37 leading chemical researchers based in Europe and abroad for their extraordinary commitment to excellence in scientific dissemination.

The Fellows (Class 2016/2017) embody a uniquely European spirit, with nationalities spanning all 16 ChemPubSoc Europe societies. Among them are Nobel Laureate Ben Feringa and many are Board Members of the ChemPubSoc Europe journals.

On hearing the announcement, President of the French Chemical Society, Gilberte Chambaud, said: “It is always a pleasure to see that our good scientists are recognized not only in France but also by our European community of chemists.”

Fellows are elected by the 16 European chemical societies and vetted by the editorial teams that together constitute ChemPubSoc Europe. Among other distinctions, they are individuals who have demonstrated a European spirit through consistent support of the journal family by refereeing, and publishing numerous well-received scientific articles.

The achievements of the Fellows (Class 2016/2017) will be celebrated at the 7th EuCheMS Chemistry Congress (7th ECC) in Liverpool, UK, at a special reception hosted by ChemPubSoc Europe on the 28th of August. 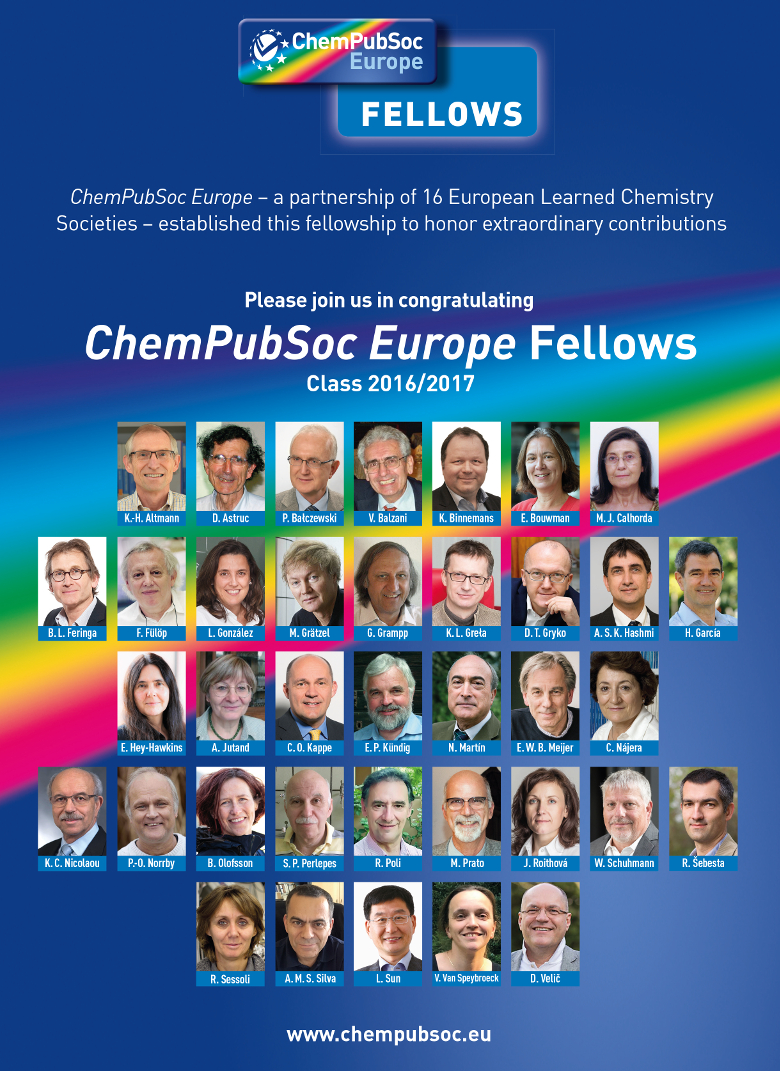 A spotlight on ChemPubSoc Europe Board Members at the 7th ECC

The European Chemical Society (EuChemS)* represents the expertise and interests of some 150000 professional chemists from 42 member societies in 33 countries.

Every two years EuChemS hosts a chemistry congress with an international remit and uniquely European appeal. The seventh iteration of this event will be held in Liverpool, UK, from 26—30 August, and is broadly themed “Molecular frontiers and global challenges“.

President of EuChemS (2018—), Pilar Goya Laza, states in her Guest Editorial in Angewandte Chemie: “For the selection of speakers and conveners, scientific excellence has been the first criterion, whilst maximizing diversity and inclusion in all its forms.” Attendees can look forward to an exciting schedule of six plenaries, 50 keynote lectures, and three prize-giving ceremonies across seven interdisciplinary fields.

Current Vice President (2018—) and former President (2013—2017) of EuChemS, David Cole-Hamilton calls the 7th ECC: “a place to meet chemists from your own and other disciplines and to build new collaborations.”

Among ChemPubSoc Europe’s Fellows (Class 2016/2017), Ben Feringa (University of Groningen) will receive the EuChemS’ inaugural European Gold Medal and Michael Grätzel (EPFL) is the recipient of the August-Wilhelm-von-Hofmann-Denkmünze Award (conferred by the GDCh). The winner of the 2018 European Sustainable Chemistry Award is Paul Dyson (EPFL). ChemPubSoc Europe warmly congratulates the three awardees, all of whom serve as Board Members of its journals. 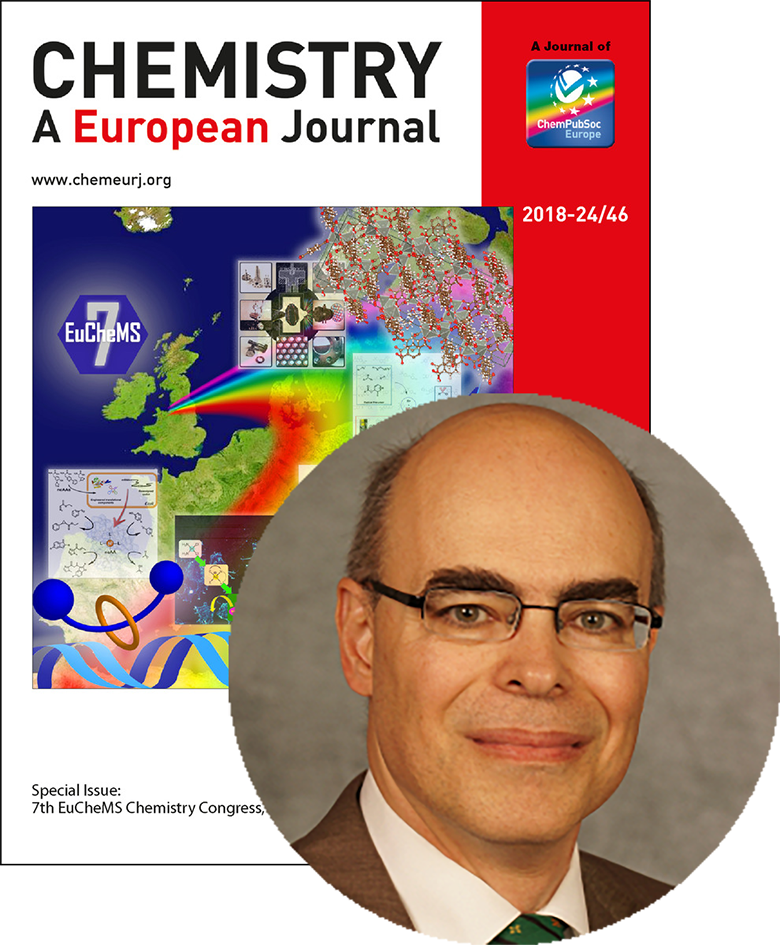 To coincide with the 7th ECC, Chemistry–A European Journal is pleased to present the 7th EuCheMS Special Issue containing contributions from 37 leading researchers, including 14 of the keynote speakers. Editor-in-Chief, Haymo Ross (pictured), says: “For Chemistry–A European Journal, it has become a tradition to publish a special issues on the occasion of this biennial conference to bring out the best research in chemistry that Europe has to offer.”

The Special Issue features an Essay by EuChemS Vice President Cole-Hamilton, in which he outlines the important role of EuChemS in influencing global policy and expresses a heartfelt wish for continued scientific camaraderie and collaboration in these times of global political turbulence. “We must train the very best people to have the very best ideas and carry out the very best research at the highest level,” Cole-Hamilton says. “Europe, more than anywhere else has the ability to do this.”

*From 2018 the European Association for Chemical and Molecular Sciences (EuCheMS) will be known as the European Chemical Society (EuChemS).

Meet the Editors on Tuesday the 28th of August from 10:30 to 11:00 am at booth A1: Our editors look forward to discussing your research with you. Among them are ChemPubSoc Europe Publisher and Editor of Chemistry–A European Journal (Haymo Ross), Greta Heydenrych representing Batteries & Supercaps, ChemPhotoChem, ChemPhysChem, and ChemElectroChem; Karen Hindson representing the European Journal of Inorganic Chemistry and the European Journal of Organic Chemistry; ChemPlusChem (Marisa Spiniello), ChemViews Magazine (Vera Köster), and sister journal Angewandte Chemie (Neville Compton). Our editors are happy to pass on messages to other sister journals.