Christian Hertweck, Leibniz Institute for Natural Product Research and Infection Biology – Hans Knöll Institute, Jena, Germany, and colleagues have shed light on this issue using genome mining to explore the biosynthetic potential of anaerobic bacteria. The team found a relevant biosynthetic pathway in the anaerobic bacterium Clostridium cavendishii. The meta-substituted benzoxazoles produced by this pathway are closoxazoles (example pictured above). Their structures were confirmed by NMR spectroscopy and total synthesis.

The team used bioinformatics and found a region in the C. cavendishii genome encoding enzymes that could be capable of catalyzing closoxazole formation. The disruption of this candidate biosynthetic gene cluster by genome editing prevented closoxazole production, which validated the assignment. 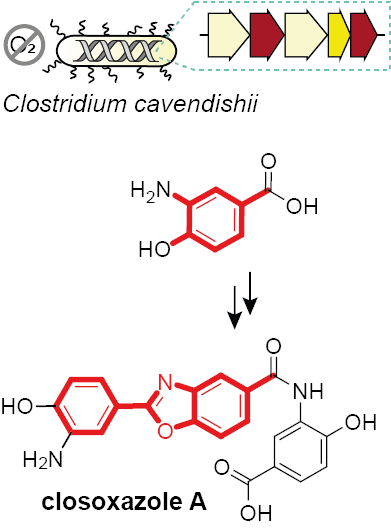 The researchers deciphered the role of each enzyme by systematic pathway dissection using Escherichia coli as a host. They found that closoxazole biosynthesis uses an unprecedented pathway and precursor, 3-amino-4-hydroxybenzoate (pictured above). This work could be useful for the discovery of additional benzoxazoles of potential therapeutic value.