Emeriones A–C (pictured below) are three natural products that were isolated from the fungus Emericella nidulans. Emerione A inhibits nitric oxide production in certain cells, suggesting it could be a lead as an anti-inflammatory or anticancer agent. The emeriones feature oxidized bicyclo[4.2.0]octadiene cores flanked by two complex side chains, which also makes them attractive synthetic targets.

Aubry K. Miller, German Cancer Research Center (DKFZ), Heidelberg, Germany, and colleagues have performed the first asymmetric syntheses of the emeriones. All three emeriones were synthesized from one linear pentaene, which undergoes an 8π/6π electrocyclization cascade. The pentaene was convergently assembled from two enantiomerically enriched fragments in a Stille coupling. One fragment was built up using a Paterson syn-aldol reaction, and the other fragment contains a dioxabicyclo[3.1.0]hexane, which was constructed via an unusual oxidation of an acetal. 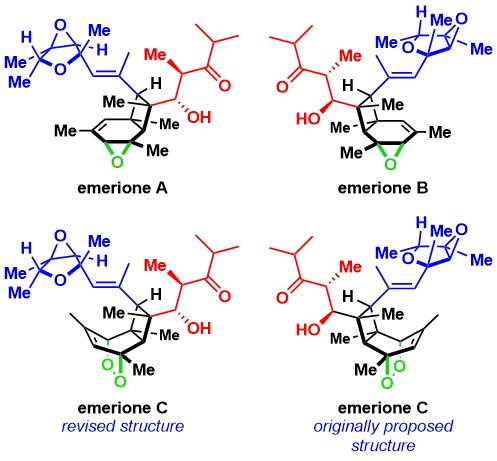 Emeriones A–C were prepared in a longest linear sequence of 17 steps. The researchers reassigned the structure of emerione C. They believe that the originally proposed structure of emerione C, which they have also synthesized and named emerione D, may be a natural product itself. This work has clarified the chemical structures of the emeriones and presents a unified approach to this family of natural products.