Falko Brinkmann organized the first Science Slam in Karlsruhe, Germany. He talked to Vera Koester for ChemistryViews about what inspired him to do it and the event itself …

What is a Science Slam?

Imagine a typical scientific talk: boring and tough to understand. A Science Slam is a competition of scientific presentations of ten minutes considered to be the total opposite. Six undergrads, grad students or post docs have the task to explain their own project to a broad audience so that they understand and love it. So, each presenter should be creative, entertaining and serious about his/her research in order to convince the jury, which actually is the audience. 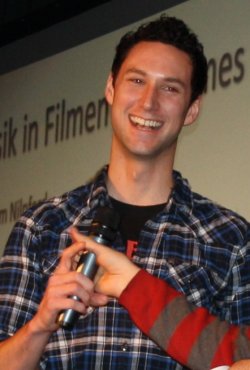 How long have Science Slams existed?

The first Science Slam came up in Braunschweig, Germany, in 2008 and since then, Science Slams can be found in almost all major cities, like Cologne, Hamburg, Berlin and, since March, in Karlsruhe, too. Last year, this kind of competition has also moved to Austria, Switzerland and Denmark.

How do you explain its success?

I do not know of a single Science Slam event which was not absolutely crowded. Even our very first event in Karlsruhe was overbooked with 350 guests. Compared to Poetry Slam, which is considered to be the Godfather of Slams, Science Slams address more people. On the one hand, everybody has had good or bad experiences with presentations and can, therefore, put oneself in the presenter‘s position. On the other hand, good entertainment and tough science do not cancel each other out. In fact, the audience will leave home highly inspired and cleverer. In addition, the audience itself is asked to participate in the event.

How did you first hear about it?

Before starting with my PhD, I moved to Hamburg for an internship at Lufthansa. My new colleagues introduced me to the advantages and events in this great city. In doing so, we went to a Science Slam, which totally aroused my interest. This was the solution of a dilemma I was always talking about: A scientist does not have the chance to show his or her work to the public, in a simple way. This was it …

How did you get the idea to organize one?

After moving to Karlsruhe last summer, I realized that some events I like to go to in Hamburg just do not exist, e.g., the Science Slam. Furthermore, while working on a long-term PhD project, one needs to have a good work-life balance since lab work can be quite lonely. This lead to the question: Why not organizing and moderating a Science Slam …?! No sooner said than done!

What fascinates you most about the idea?

The more I got into the idea, the greater my fascination. Students and researchers just do not get the chance to present their work and get credit from the public. Well-made entertaining presentations are not really accepted in the academic world. And, at university, you only focus on your specific discipline. A Science Slam provides a fascinating platform for everybody who has a broader view. 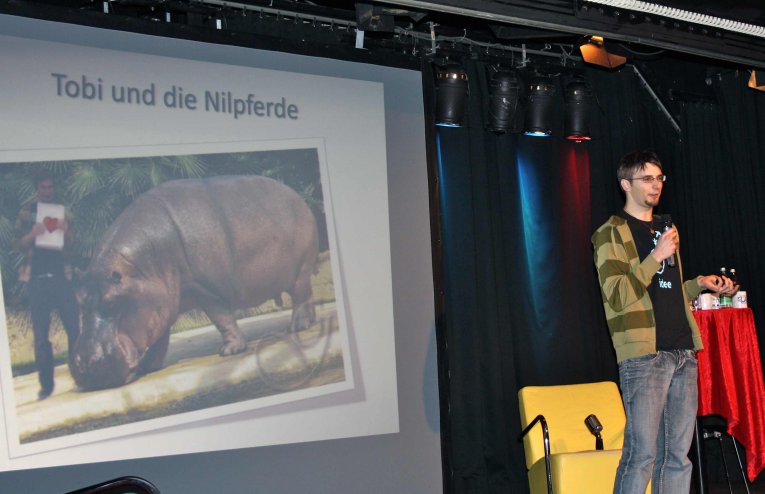 What were the greatest challenges?

Whenever starting something innovative, you earn critique. In my case, sponsors needed to be convinced, a great location had to be found and people had to be persuaded that a Science Slam is not a nerdy and dusty event, but rather fresh and cool. You definitely experience many prejudices. But, it is extremely exciting which kind of people you meet and get in touch with. As organizer, my heartbeat always increases if I see an e-mail saying “application” in the subject line. The diversity of research is totally amazing — think of retro computer games or the reality of history in heavy metal songs.

Was it hard to find presenters?

Science Slams have been popping up all over Germany for two years now. Fortunately, neighboring Slam cities see each other as friends. My thanks to the organizers of the Science Slam Hamburg (Dr. Julia Offe, www.scienceslam.de) and Freiburg (Manuel Lorentz and Harald Wohlfeil). We are aiming to establish a network of Science Slammers. This enables us to exchange great scientists, which surely gives you a backup as organizer.

However, as soon as the Science Slam idea has spread through the university and city, it is easy to motivate presenters. In most cases people who were part of the audience once, convince their friends to get on stage.

Is there a selection process?

Science Slam is not a formal institution. It‘s a fun event! Anybody is most welcome to present his or her research! There is absolutely no selection process.

Did the reactions to Science Slams differ across the sciences?

The reactions definitely differ across the different disciplines. Physicists and researchers of social studies are more frank with a Science Slam presentation than chemists or business students, surprisingly. But I trust in our fans that they will help spreading the Science Slam idea into the still cautious branches of science!

How did you ensure a balance across the sciences?

Mentioning science, most of the people think about physical equations and test tubes. This, however, does not represent the vastness of disciplines, of course! Therefore, I attached importance to having a balance across the sciences. The first Science Slam in Karlsruhe focused on social studies, computer and natural science with two representatives each, ranging from a Bachelor student to a researcher in industry.

It is always a bit tough to ensure a balance as a single event is dependent on the number of applications. But I am positive about its success, especially in a city like Karlsruhe, with eight different universities.

Who did the audience consist of in terms of number, age, scientific background?

As already mentioned before, Science Slam locations are crowded. We were able to squeeze in 350 people into the very nice concert hall of a place called Jubez. However, I think there must be an upper limit. As soon as the event is getting too big, potential presenters get scared and might refrain from getting on stage. It is therefore important to keep the pleasant easy-going atmosphere.

Of course, many students and scientists of the age of 20 to 30 form the audience. However, high-school students come to get an impression of the wideness of science as well as ordinary people without any scientific background who are generally interested in up-to-date research and good entertainment.

Worth mentioning is the growing interest from industry in Science Slams! Companies send head-hunters in order to look for potential employees; investors come to look for new technologies. 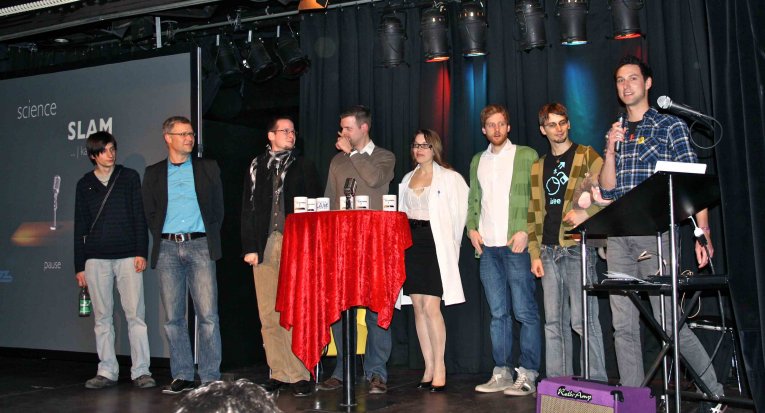 Will you organize another one? If so, when?

Yes! The next Science Slams will take place at the same location (Jubez Karlsruhe), on June 30th and October 20th. By the way, there will be four events in 2012, too. I warmly recommend the web page www.scienceslam.de to find out about the next Science Slam nearby.

Why should people attend a Science Slam?

I usually ask people the following questions: Have you ever thought about taking a nap during a presentation? Have you ever asked yourself, “What is he talking about …?” or do you wonder what students and researches do the whole day?

Being part of the Science Slam audience, you will learn a lot about absolutely up-to-date research, will be able to understand everything and, most importantly, you will have a fun time! And after experiencing a Science Slam once, you might have the desire of being on stage the next time! If so, get in touch with me or one of the other Science Slam organizers. A Science Slam is an event for everybody, either as presenter or guest! 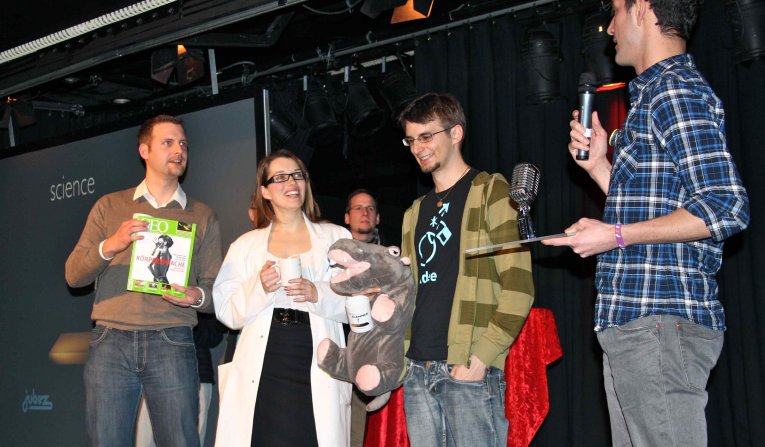 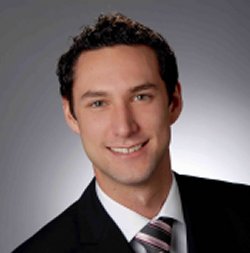 Falko Brinkmann (27) studied physics in Münster, Germany, from 2004 to 2009. Before starting his PhD in 2010, he moved to Hamburg, Germany, in order to work for Lufthansa on a temporary Lean Management project. He got back to research in the field of nano medicine and now commutes in between Hamburg University Hospital (Institute of Tumorbiology, Prof. Klaus Pantel) and Karlsruhe Institute of Technology (Institute of Nanotechnology, Prof. Harald Fuchs).