As a follow-up to the article on the March for Science Heidelberg, Dr. David Peralta, Editor ChemMedChem, talked with Dr. Eva Haas, part of the local organizing team, for ChemViews Magazine to find out how the team prepared for the event and what their upcoming plans are.*

Congratulations on a successful march! How many of you were in the core organizing team, and what are your backgrounds?

We were a group of 20 people with quite mixed backgrounds – scientists and nonscientists. The five of us in the core organizing team were a business economist, a secretary of a graduate program, a university student of history and English, a psychologist/photographer, and then me, a biologist. Our aim was to organize a March for Science for everyone – not just for scientists or academic staff. 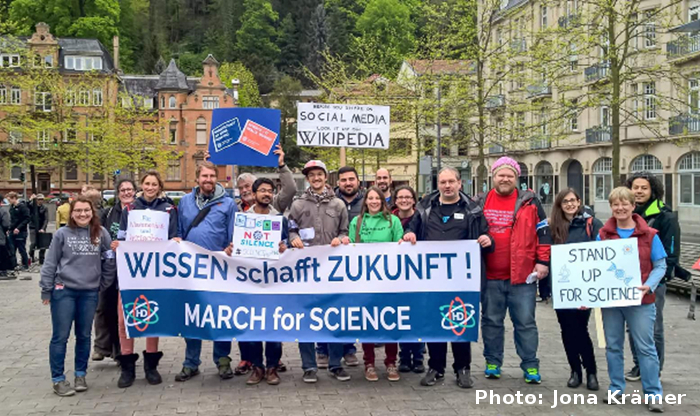 It must feel good having seen it all come together on April 22nd. How did the plan to organize a satellite march in Heidelberg come about?

Each of the organizers had their personal story of why and how they got involved in the march. We all found each other online with the help of the German-wide coordinators of the March for Science Germany, who connected everyone who was interested in starting a march in Heidelberg.

My personal motivation for becoming involved was two-fold. On one hand, as a biologist, science educator, and citizen, I strongly feel that science is an integral part of everyday life in modern society. We as scientists have the responsibility to communicate this to society, and we as a society need to safeguard independent science from political pressures and societal movements that want to misuse scientific findings for their own agenda.

I worry about developments in countries such as the USA or Turkey, where free science and scientific discourse is threatened by political developments – developments which, due to the international nature of research, have a direct effect on freedom of science in other countries. The March for Science aimed to show that the majority of our society does not welcome such developments.

Secondly, I believe that debates, decisions, and policies in a progressive democracy should be informed by well-founded information rather than “alternative facts” and “fake news”. They should involve critically-thinking and science-literate citizens rather than people convinced by populism for political gain. Science and the scientific method help us create this well-founded information and give us tools to think for ourselves.

Did you encounter any difficulties before or during the event?

None of us had organized a protest march before, so everything was new. Our diverse backgrounds turned out to be extremely advantageous when it came to coordinating the organization of the march, approaching potential supporters, promoting the movement, and running the march on the day. Being diverse also meant diverse opinions amongst the organizing team. As we decided to be democratic the whole way through, all critical decisions, be it how to position ourselves to political developments or whom to invite to speak at the march, were made by majority vote or compromise, and involved some lengthy discussion.

Now that it’s all over, what were your impressions of the Heidelberg march? Did you have any favorite moments or snapshots, and would you have done anything differently?

We were totally amazed by the positive vibes that every single marcher brought to the event. We could see from the many posters and signs that people really thought about the messages they wanted to send out into the world.

My personal highlight was seeing 1,800 people cheer for science when science slammer Lorenz Adlung, German Cancer Research Center (DKFZ), Heidelberg, made a passionate plea for open, critical, and independent science as part of our society and called out “If you agree that science matters, then just raise your fist and bounce!”

The hashtag #WhyIMarch was prominent in the days leading to April 22nd. Why do you think it was important for scientists and science supporters to attend the global marches?

I think it was about time to give a face – or, in that sense, many faces – to science. Science plays an important part in the daily life of everyone single one of us. The march showed the faces of scientists and citizens: of people who make the science and of people who benefit from the science and shape it. It sent a clear signal to anyone who tries to undermine scientific discoveries or misuse science for political gain: We are here to protect independent science and are willing to be loud and proud about it!

Do you have any plans to follow up the march? Are there other events, marches, or related seminars pertaining to science awareness and outreach in the future?

We are keen to use the momentum the marches created around the world and here in Heidelberg to kick-start something more sustainable. There is currently a lot of discussion going on within the global movement on how to shape the future of the movement on the European and national level. There is potential to go in a lot of different directions, including science outreach and science policy.

In Heidelberg, we just had our first follow-on event after the march—a panel discussion about the image of the scientist in society. The event took place on May 18th at the DKFZ Communication Center and was hosted by Carsten Könneker, Editor-in-Chief of the magazine Spektrum der Wissenschaft. The five panelists included Theresia Bauer, Minister for Science, Research, and the Arts for Baden-Württemberg, the leaders of three major research institutes in Heidelberg (DKFZ, EMBL, and Heidelberg Institute for Theoretical Sciences), as well as the chair of the German Sceptic’s Society. The discussion, which also included open questions from the audience, has given lots of food for thought on how to improve the interaction between society and science in the future. Topics included how to make science trustworthy, how to better train scientists in communication, and whether to teach critical thinking in schools.

The March for Science and the panel discussion showed that there is the desire and demand for a meaningful two-way dialogue between science and society that enriches both sides. The March for Science has managed to bring together a community of science-passionate people—scientists and non-scientists—with diverse backgrounds and perspectives. We would like to see this community keep engaging with each other and hope to foster this in future science/society activities.

Thank you for answering our questions.

*This interview is dedicated to Professor Dr. Jörg Langowski, DKFZ, Heidelberg, who passed away a couple of weeks after the march. Professor Langowski was a member of the organizing team and was not only an excellent researcher, but also a staunch supporter of good science communication and outreach.

Eva Haas studied biology and received her Ph.D. in microbiology from the University of Manchester, UK. For the past three years, she has been working as an education officer for the European Molecular Biology Laboratory (EMBL) in Heidelberg, Germany, where she combines her passion for science, communication, and creativity.