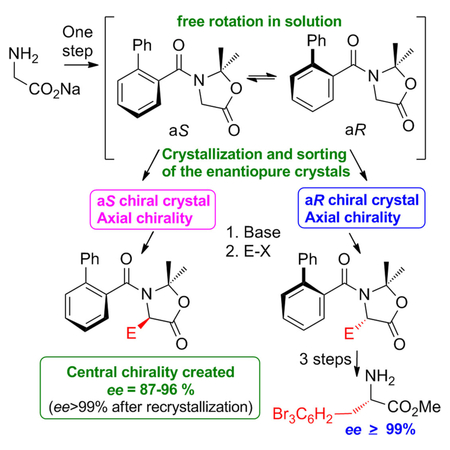 Valerie Alezra, Université Paris-Saclay, Orsay, France, and colleagues have synthesized chiral tertiary α-amino acids and alcohols from glycine through an oxazolidinone intermediary compound. The dynamic axial chirality of the tertiary aromatic amides is frozen in a crystal. The aromatic acyl group substituent on the nitrogen atom helps crystallize the oxazolidinone into a chiral space group. This phenomenon allows for a stereoselective attack on the α carbon (see scheme) and, thus, the stereoselectivity of the subsequent steps.

The configuration of the final product could be controlled by manually sorting and selecting the initial crystals. Different reaction conditions and various aromatic acyl substituents were investigated, before an intermediary compound was found that formed suitable chiral crystals. The researchers then substituted various groups on the α carbon (including allylic and benzylic groups). They also explored the deprotection of the substituted compounds to the respective tertiary α-amino acids/alcohols with yields of 40–50 % and 90–99 % enantiopurity.