From the Fruit of a Fungus

Antrodia camphorata is an intriguing species. It is a parasitic fungus that grows on Cinnamomum kanehirai Hay (Lauraceae), a type of camphor tree, in Taiwan. Its fruiting body goes by the name niu-chang-chih or jang-jy in traditional medicine and is a popular but expensive remedy for diarrhea, abdominal pain, itching, and even high blood pressure and liver cancer. In the early 2000s, extracts containing phenyl derivatives, triterpenoids, diterpenes, sesquiterpenoids, steroids, lignans, fatty acids, and maleic and succinic acid derivatives were obtained from the fruiting body. Tests showed cytotoxicity, anti-inflammatory, and neuroprotective activity.

In 2007, chemist Jih-Jung Chen and colleagues, at Tajen University and Chang Gung University in Taiwan, reported the isolation of several benzenoids from the fruiting body of this fungus. In fact, they laid claim to antrocamphin A, antrocamphin B, a new 1,3-dioxolan-2-one derivative, antrodioxolanone, 13 previously known compounds, as well as the interesting 2,3,4,5-tetramethoxybenzoyl chloride. As with reports of natural products from almost any fungus, there is always the hope that a novel compound, or even class of compounds, might offer new leads in medicinal chemistry; antibiotics and anticancer drugs that perhaps side-step emerging resistance in such diseases, anti-inflammatory or analgesics, the list goes on. 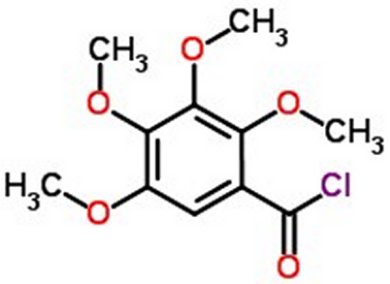 It is the acid chloride that caught the attention of Associate Professor Matthew Piggott and colleagues at the University of Western Australia (UWA), in Perth. The team was rather surprised by the report from Chen and colleagues for two reasons. First, they explain, this was an unprecedented discovery — an acid chloride natural product published without comment to this highly reactive chemical motif. Secondly, they point out that not only is the fungus able to biosynthesize this acid chloride in an aqueous environment, but the resulting compound is stable to extraction and multiple chromatographic purifications. “This was an acid chloride unlike any other in our experience!” the UWA team says. “Even the highly sterically hindered 2,4,6-tri-tert-butylbenzoyl chloride undergoes rapid hydrolysis.”

The Perth team has now synthesized the compound, which is actually rather simple in itself, reported without fanfare by Chen and colleagues and carried out a whole raft of analyses to demonstrate whether or not this compound is actually produced by A.camphorata. Seemingly, it is not. 2,3,4,5-Tetramethoxybenzoyl chloride is not the natural product the Taiwanese team thought it was. Having been unable to corroborate the discovery, Piggott and colleagues looked more closely at the evidence provided in the Chen paper. At face value, it seems that the mass spectra and the infrared and NMR data are appropriate, but the details do not mesh with the reported compound nor with the spectra recorded for the compound synthesized by the Australians.

For instance, there was a complete lack of chlorine-37 isotope peaks in the mass spectrum and an ion fragment corresponding to the molecule minus its chlorine was missing. “On the basis of the mass spectrum alone, it seemed highly unlikely that the natural product was an acid chloride,” Piggott and colleagues assert. The IR and NMR data of the methanolysis product, methyl 2,3,4,5-tetramethoxybenzoate, also a natural product, seemed appropriate but were apparently not compared with literature values. If they had been, discrepancies between the spectroscopic data from the two sources might have raised a flag to an anomalous interpretation. “It appeared that the methanolysis product characterized by Chen et al. had been structurally misassigned and, ergo, so had the natural product,” Piggott and colleagues say.

Not a Natural Product

It is perhaps disappointing that such an oddity from such an odd species turns out not to be the reported natural product. However, Piggott’s team has presented irrefutable evidence that A. camphorata does not produce the acid chloride 2,3,4,5-tetramethoxybenzoyl chloride. The identity of the actual metabolite reported by Chen and colleagues now remains to be established; efforts to do so will hopefully not be fruitless given the diverse positive results seen in biological assays for extracts from this fungus.

And it seems that if nature really does produce an acid chloride, it remains to be proven.