A Tribute to Sir Fraser Stoddart by Omar Yaghi

Fraser Stoddart, who is being honored for fifty years of researching the frontiers of new knowledge of our time, grew up as an only child and he lived with his family on a farm. In those days, long ago, he worked hard around the farm. He was often seen to wheel a wheelbarrow from one point to another.

One early morning, he was not on his optimal form and charm. He found that out as he caused the wheelbarrow to flip upside-down. What he saw changed his life forever! He stood there watching the wheel go round and round … around an axle, the wheel went. He was intrigued by how the wheel was trapped in its motion going round and round.

He quickly ran into the farmhouse, and was upset by what he had done, but could not escape the feeling that he just saw something profound. The image of the kinetically trapped wheel in spinning motion was an image now etched in his mind. To be exact, the wheel and axle he saw were in fact not soldered together, rather they were joined by an invisible bond. 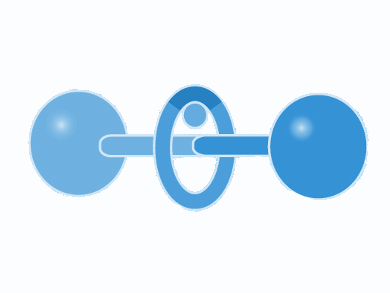 The clever boy was studious and hardworking and managed to pass all his exams and earn his degrees all the way to a Ph.D. from the big university not too far from his lovely farm. He meandered along the paths of new knowledge doing this, that, and mostly the other. The “other” was the creation of new molecules. These were things too tiny to see, too slippery to hold, and too elusive to control. But one day, when he least expected, Nature revealed itself to him. He found a molecule that was not unlike the wheel he once saw and was already etched into his mind. He was lucky this time because he peered and found many wheels, which were touching, stacked next to each other, and on top of each other like the wheels in the farmyard. “Aha!” he said excitedly: I can use the skills I learned to stitch together smaller parts and make wheels that intertwine such that they are forever interlocked. He did that many times and did it very well with a group of emerging scholars who are now his great friends. Oh, what fun that was!

But, although the interlocked wheels were fun and they put bread and butter on the table, his creativity and untamed curiosity led him to put a molecule axle into the eye of the wheel. By now he is calling the wheel a blue box. The blue box was blue, but it was not really a box. It was a ring of connected rings in the shape of that eternal wheel, ideal for putting it around an axle molecule, which he finally did with a high level of skill. He looked at the ensemble and admired it for a long time. Then he proceeded to poke at it with an electric prod. Miraculously, the wheel moved along the axle from one end all the way to other, before it fell off, this first time.

Remembering the wheel of the wheelbarrow of his youth, the now grown-up man was serious enough to put a round sphere at each end of the axle rod. The spinning wheel was trapped, and when he prodded it one way, it moved swiftly to the other side, and when he prodded it the other way, it moved back to the first side. He and his army of emerging scholars played with this device for many years to come.

The eye of the wheel passing in its journey over a smooth axle one time, and over a jagged one another time. But going from one side to the other, all the time. Oh, what the eye of the wheel saw: many molecules all with vivid colors he liked: red, blue, and green, were his favorite colors. He holds his creation up in his hand to show it to one and all and says the axle and wheel are held together by a mechanical bond.

When he talked to his village of academics about his creations, and what he got accustomed to calling the family of rotaxanes, they were convinced that this untamed scientist has invented the chemistry of the invisible bond. His invisible bond led to very tiny containers, elevators, shuttles, and release valves. Oh, how clever he was. The invisible bond was like God! No one saw it, but all knew of its existence and could point to the wake of its mighty presence. Thus, is the scientific journey of this humble servant of the rotaxane and avid user of the invisible bond.

Another Kind of Invisible Bond

One day at dawn, he received a surprise call. It announced a prize he will be awarded around Christmas time. The voice on the other line said: We want to recognize you for your invisible bond, and engrave your name in the annals of science among its greats: Curie, Werner, Einstein, Bragg, and Pauling. You have arrived! All his friends knew deep down that he would always receive this prize, but they also knew that their friend already had the ultimate prize. It is another kind of invisible bond that he cultivated between him and his pupils and fellow scholars. A bond like no other. The bond of giving one’s precious time, unqualified support, mentorship, and helpful, honest advice. Wise men throughout the history of time knew that this is the bond that makes for a genuinely happy man and better humankind.

This scientist still manages to combine the excellence of research he has, with a humanity of special kind. Yes, he won the big prize and he achieved distinction in being a giving, honest, and honorable man. Oh, how sweet it is that this man can go forth helping emerging scholars of every kind not only in his village but also in the global community. We congratulate you from the bottom of our hearts, for all your great invisible bonds.