Boron neutron capture therapy (BNCT) is an emerging technique against cancer. It relies on the release of high-energy particles from non-radioactive compounds containing boron-10 upon irradiation with epithermal neutrons (i.e., those with an energy of 0.025–0.4 eV). Because the trajectory of these particles is in the magnitude of a cell’s diameter, the BNCT damage is confined within the tumor, as long as the BNCT agents are specifically localized in tumor tissues. 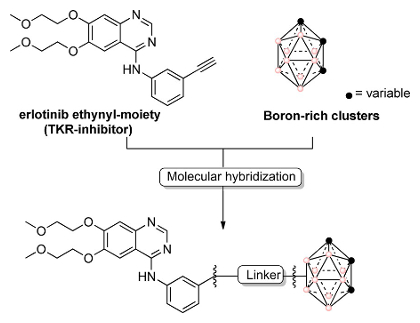 The team then tested the hybrids against C6 glioma cells (brain tumor cells), and found that the hybrids exhibit anticancer activity that is dependent on their lipophilicity. Erlotinib alone did not show significant anticancer activity. It has an IC50 value (a measure of the compound’s effectiveness) of over 100, compared with 30 μM and 34 μM, respectively, for the two most active hybridized compounds.

The researchers also tested the most active compounds against primary glial cells (healthy brain cells) and showed that the compounds are selective towards cancer cells. This makes them promising anticancer agents with dual action: as TKR inhibitors (based on the erlotinib unit) and as BNCT agents (based on the boron-rich clusters which can capture neutrons).