Who hasn’t seen M.C. Escher’s famous picture of the stairs that appear to always go up even though they form a closed circle? This tricky visual illusion is also known as a Penrose stair, named after its discoverers, Lionel and Roger Penrose. Hiroyuki Isobe and a team at Tohoku and Tsukuba University, Japan, have now introduced a molecule in the journal Angewandte Chemie that looks like a Penrose stair.

In order to depict the composition and structure of molecules, these three-dimensional objects are represented as two-dimensional line drawings. An additional touch of perspective is often added in order to show the spatial orientation of the individual molecular components relative to each other.

that is impossible in reality. We are fascinated and amused by looking at such visual illusions as M.C. Escher liked to draw them. One of his most famous works is a lithograph based on the Penrose stair; people in the image walk in a circle although they appear to be constantly descending the stair.

The scientists working with Isobe were reminded of this stair when they synthesized a molecule belonging to the cyclobis[4]helicene class and attempted to represent it as a line drawing. Helicenes consist of planar aromatic rings made of six carbon atoms. The rings are connected along one edge, forming an angle. For spatial reasons, the molecules are forced to twist into spirals. A [4]helicene is made of four connected rings. The Japanese researchers connected two such units through two single bonds.

Helices can twist around to the right or left. In these rings made of two helicenes, both helicene units twist in the same direction. When represented as a two-dimensional perspective line drawing, the double helicene gives the impression of a Penrose stair: both halves lead downstairs but after going around the circuit the eye is right back at the starting point (see picture, right).

How can this be? The molecule is clearly not an impossible object; it exits and its structure is not different than supposed. The solution to this conundrum is revealed when the molecule is represented from the side: the axial twist of the single bonds between the two building blocks makes the tilted orientation of the helicene ring systems possible (see picture, below).

Isobe hopes that this class of molecules will open up new possibilities as a building block for liquid crystals. 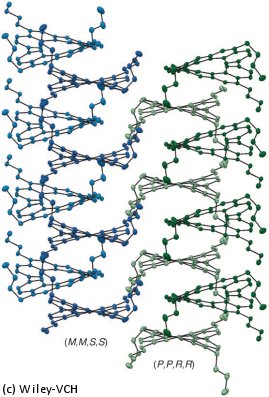