In public and private buildings as well as in transport vehicles, people are confronted with a broad spectrum of foreign substances, via both the air and dust residues. In this part, we take a look at how climate change and air pollution affects indoor air quality.

Constant references to the term “climate change” have resulted for many people in what might be called “acoustic overstimulation”. That is actually a rather dangerous situation since hearing something too often can cause one to become accustomed to it, ultimately accepting it as a new normal. But global warming is in no sense normal, and coupled with rapid population growth and continued increase in environmental pollution, it represents one of our greatest challenges [58].

Considering the overall ecosystem, a fatal increase in average temperature is not the main problem from the limited perspective of interior spaces. Of far greater significance is the associated increase in relative humidity. Unimpeded exchange of interior and external air, as for example through the opening of windows, will in the future frequently lead to interior spaces falling below the dew-point. This will in turn cause condensation of water, encouraging the growth of microbiological organisms. Thus, we can anticipate an increase in the importance of mildew as an indoor contaminant. 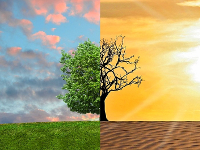 We have previously discussed the notion of completely sealing living spaces up, and strictly regulating air exchange via artificial ventilation (see Part 1). This approach is already commonplace in the tropics. Modern hotels there are in most cases already fully air-conditioned, so that it is no longer possible even to open the windows. That is reasonable since otherwise, such a hotel would rapidly become moldy throughout. Furthermore, the air in many megacities is so heavily polluted with toxic substances and particles that indoor/outdoor air exchange is rarely advisable. [59]

At Central European latitudes, the concept of “Smart Homes” is gaining ever greater popularity. Thanks to sensor control, modern heating and ventilating systems are increasingly adjusted automatically to meet current needs [60]. This does, however, impose a certain measure of rethinking on the part of the user with respect to occupancy behavior.

Many buildings constructed in the 1960s through the 1980s conceal legacy issues that are now coming into view in the course of rehabilitation work. In Germany, for example, the asbestos problem has once again surfaced. Glass and mineral fibers that have reposed for decades in attics must now be attended to through removal under controlled conditions, and subsequent disposal. Wood that was still being treated with biocides in the 1990s, as per regulation, today is regarded as hazardous waste. 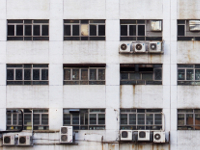 With respect to the development of benchmarks, Germany certainly need not apologize: the Commission for Indoor Criteria (AIR), active since 1996, provides justification for each individual criterion established relative to indoor air through a professional publication in the Federal Health Gazette. All such criteria and the associated documentation are accessible online via the website of the Federal Environmental Agency.

However, things are rather different on an international level. For political reasons, absurdly low benchmarks have often been set, ones far removed from reality. An especially sad example relates to formaldehyde. Even though a well-grounded and scientifically accepted value of 0.1 mg/m3 has been established by the World Health Organization (WHO) [61], values closer to 0.01 mg/m3 continue to be discussed. This ignores the fact that in many metropolitan areas, the ambient air concentrations of formaldehyde are already significantly above 0.01 mg/m3 [62].

Attempts are often underway to reduce inner-city formaldehyde concentrations further by regulating such sources as construction products. Significantly more serious point sources, such as ethanol ovens [63] or food warmers or chafing dishes, are completely ignored. Focusing on a small number of compounds emphasized in current discussions involves the risk that other substances—such as radon, known to be a carcinogen—will be largely ignored [64].

In the near future, it will be necessary that we engage intensively with how the necessary residential ventilation will be effectively accomplished in heavily polluted areas. In the United States, a panel of experts has already addressed at length the possible effects of climate change on interior air quality and on the health situation generally [65]. Such a discussion has so far been lacking in Germany and Europe at large.

Perhaps mankind will, in fact, need to colonize Mars in order to escape global air pollution! On the other hand, after viewing “Total Recall” (the original version, of course), I don’t really want to go there either. If the ventilation system were to stop functioning (because some villain turned it off), there’d be no air left whatsoever!

Dustin Poppendieck, National Institute of Standards and Technology (NIST), Gaithersburg, MD, USA provided me with access to his data on NIBA measurements in test chambers. Jonathan Wiliams’ research group at the Max-Planck-Institute for Chemistry, Mainz, Germany, generously provided me with illustrations and data related to their air analyses in movie theaters. Glenn Morrison from the Missouri University of Science & Technology, Rolla, MO, USA, once again permitted me to utilize his illustrations from the illustrative experiments with DEP and DnBP. Giorgio Buonanno, Università di Cassino, Italy, patiently explained to me why only Italians are able to bake good pizza, and why particles must necessarily form during the process. Heike Pichlmeier, Alexandra Schierwede. both Fraunhofer WKI, Braunschweig, Germany, and Wolfram Birmili, Umweltbundesamt, Berlin, Germany, read the text critically and made very helpful suggestions for its improvement. Manuela Lingnau, Fraunhofer WKI, Braunschweig, prepared many of the illustrations. My warm thanks go out to all the parties identified here.

Tunga Salthammer studied chemistry at the Technical University (TU) Braunschweig, Germany, and after a 10-month stay at Strathclyde University, Glasgow, UK, earned his doctorate at the Institute for Physical and Theoretical Chemistry in Braunschweig. Since 1990, he has been a Researcher at Fraunhofer WKI in Braunschweig. There, he leads the Department of Materials Analysis and Indoor Air Chemistry and is Vice Director of the Institute.

Salthammer is Adjunct Professor at TU Braunschweig and at the Queensland University of Technology, Brisbane, Australia. From 2003 to 2009, he was Professor of Indoor Air Hygiene at the Ostfalia University of Applied Sciences, Braunschweig/Wolfenbüttel, Germany. He has been a member of the Indoor Air Hygiene Commission of the German Federal Environment Agency since 2006, and Chairman of the Commission since 2012.

The Air that I Breathe – Part 1

Chemistry of indoor air is a relatively new, diverse and interdisciplinary field surrounding us every day

The Air that I Breathe – Part 2

How dangerous are my household appliances?

The Air that I Breathe – Part 3

Emissions of e-cigarettes and other drugs

The Air that I Breathe – Part 4

Man as a source of substances, life on Mars, and what to learn from movies

The Air that I Breathe – Part 5