The colors and scents of flowers are important for attracting pollinators, e.g., honey bees. There is some evidence for biosynthetic connections between flower pigments and volatile scent compounds. For example, anthocyanin pigments (responsible for blue, purple, and red colors in flowers) and volatile benzenoids or phenylpropanoids are derived from a common biosynthetic pathway. The same is true for carotenoid pigments (responsible for yellow, orange, and red colors in flowers) and volatile homoterpenoids or apocarotenoids.

Jaime Martínez‐Harms, Bernd Schneider, and colleagues, Max Planck Institute for Chemical Ecology, Jena, Germany, have found that floral pigments and volatile compounds occur in specific combinations in the yellow poppy flower, Papaver nudicaule. The analysis of floral volatiles using gas chromatography–mass spectrometry (GC‐MS) revealed that the presence of indole is strongly associated with the occurrence of nudicaulins, the pigments of yellow flowers. Whereas yellow flowers emit an excess of indole, orange flowers lack the substance in their smell.

The results indicate that the indole moiety of nudicaulins and emitted indole might be products of the same biochemical pathway. Experiments that involved observing honeybees in a “flight arena” with different artificial flowers (pictured below) demonstrate that this type of association has a positive impact on the ability of the bees to discriminate between different flowers. Bees trained with stimuli combining colors and odors showed an improved discrimination performance. 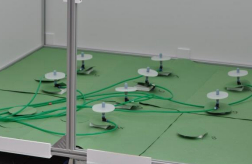