The world’s most prestigious pre-university chemical competition, the International Chemistry Olympiad (IChO), had its humble beginnings in a meeting of 18 competitors in 1968 Czechoslovakia. Now in its 50th year, the IChO50 (July 19–29, 2018) was hosted collaboratively by two countries—Czech Republic and Slovakia—and it catered to 300 students.

To qualify for the IChO, secondary school students under 20 first compete nationally to decide on the four individuals that will represent their country. After months of preparation, aspiring Olympiads descend on the host country to tackle two challenging chemistry exams of a theoretical and practical nature. The number of points scored ultimately determines placement in the competition.

From the very beginning, the annual IChO has inspired students to think independently and creatively about chemistry. Each IChO challenges participants to complete a theoretical and practical chemistry exam in which a range of topics are covered across the breadth of organic, inorganic, and analytical chemistry, and includes problems set to a university bachelor degree level. The responsibility of authoring these two exams falls on the organizer and is carried out by a team of talented chemists and educators.

Hosting IChO50: Two Heads are Better Than One

Hosting the IChO is a considerable commitment in which the country’s Ministry of Education and an institute of learning (usually a university) join forces to provide the financial, practical, and technical expertise required for the competition. More than 30 countries have hosted the IChO, however, 2018 is the first year in which two countries have organized the event together.

Co-hosting the Olympiad was the dream of IChO50 Presidents Petr Holzhauser, University of Chemistry and Technology, Prague, Czech Republic, and Martin Putala, Comenius University in Bratislava, Slovakia, who have been involved with the competition since they were students. The two friends hoped to bring IChO back to where it all began for its 50th anniversary and on the 100th anniversary of the first Czechoslovak Republic.

Hosting responsibilities were shared between two institutes over a 10-day program packed full of events and activities. The Comenius University in Bratislava, Slovakia, was the venue for the exams, and the University of Chemistry and Technology in Prague, Czech Republic, hosted the adjudication and the closing ceremony.

Each IChO tests the chemical knowledge and understanding of competitors with an entirely new set of questions and experiments. They are painstakingly prepared by a team of authors over many months. Authors have considerable creative license over their subject matter and are free to reference the history, geography, and culture of their host country, as well as contemporary problems in chemistry.

Petra Ménová, University of Chemistry and Technology, Prague, Czech Republic, head of the Czech Scientific Committee and supervisor of all Czech authors for IChO50, explains that several brainstorming sessions were needed to decide on the chemical context of the IChO50 questions. “We listed over 100 topics related to Czech science, history, culture, and geography,” Ménová says. “We then narrowed the list and worked on the ideas in more detail.”

Finalizing the diverse range of problems posed in the IChO50 theoretical exam was particularly time-consuming. Topics ranged from DNA, fuel cell efficiency, and radioactive isotopes to metal coordination geometry, natural products, and medicine. A co-author on two of the theoretical questions, Ondřej Šimůnek, University of Chemistry and Technology, Prague, Czech Republic, says: “Normally the very first draft of a problem differs a lot from its final version.” The record breaker for IChO50 was theoretical Problem 8: Caryophyllene, with 30 iterations.

A 30-strong team of Czech and Slovak chemists spent a year and a half authoring and polishing eleven exam problems for the IChO50—three in the practical exam and eight in the theoretical. For the benefit of the competitors, these were then translated into more than 50 different languages the day before each exam.

Worth Its Weight in Gold

At a cost of €2 million, IChO50 hosted participants and their accompanying mentors for ten days. Included in that price tag was the remodeling of the teaching laboratories at the Comenius University in Bratislava to ensure that they could accommodate 300 students, as well as personnel, raw materials, food, medical care, and the opening and closing ceremonies.

While every IChO is subject to budget restrictions, few would consider that this constraint extends to the design of the practical exam questions. During the Olympiad, 300 students performed identical experiments simultaneously, in 19 laboratories equipped for organic synthesis—monitoring chemical kinetics and analyzing Slovakian mineral water. To keep costs down and save space, small-scale experiments and dilute solutions were necessary, and bulky or expensive instruments were unfeasible.

Erik Szabó, Comenius University in Bratislava, Slovakia, head of the team of authors for practical tasks in physical chemistry, calls the scale of the preparations “unimaginable for anyone who has not seen it”. He describes regimental scale efforts in cleaning, labeling, and analysis, saying: “In organic chemistry, every sample of the starting materials must be weighed and labeled, and after the competition, every product must be dried, weighed, and analyzed for purity.”

A Closer Look at a Practical Problem: A Glowing Clock Reaction

In this problem, students examined the kinetics of a chemiluminescent reaction involving luminol and a redox catalyst. This property is well-known to fans of forensic TV dramas: When luminol and an oxidant are sprayed onto a bloody crime scene, the iron in blood causes luminescence.

The same phenomenon is observed with a redox catalyst such as Cu2+ and hydrogen peroxide (H2O2), which was the foundation of this IChO50 exam problem (see Eq. 1). Introducing cysteine to this mixture reduces and binds copper, forming Cu+-cysteine until such a time when H2O2 has oxidized all of the cysteine into cystine (see Eq. 2) and a luminescent flash of light is seen.

Students were asked to observe the time and temperature associated with chemiluminescence, and in doing so to determine the rate of cysteine oxidation. With these results, it was then possible to calculate the rate of consumption of cysteine, and the partial reaction order with respect to H2O2.

When first developing the problem, Szabó admits there was some doubt as to whether the chemiluminescence would be visible in normal daylight. “But we tried the reaction in a black test tube and that worked really well,” he says.

Chemical kinetics is a challenging topic for practical exams because it requires students to combine mathematical reasoning with careful physical measurements (such as temperature and volume) as they test their hypotheses about a system and determine which laws are governing it. Where kinetics are concerned, temperature is “troublesome,” says Szabó, because it is so susceptible to change, and can in turn influence what happens in a chemical reaction. With this in mind, the IChO50 team designed an experiment that allowed students to monitor and record their reaction conditions individually.

A Closer Look at a Theoretical Problem: Caryophyllene

This problem immersed students in the field of natural product synthesis in pursuit of β-caryophyllene—a naturally occurring sesquiterpene found in small-leaved linden, the Czech national tree. Caryophyllene is an unusual natural compound because it contains a cyclobutane ring and a trans-double bond in a 9-membered ring. 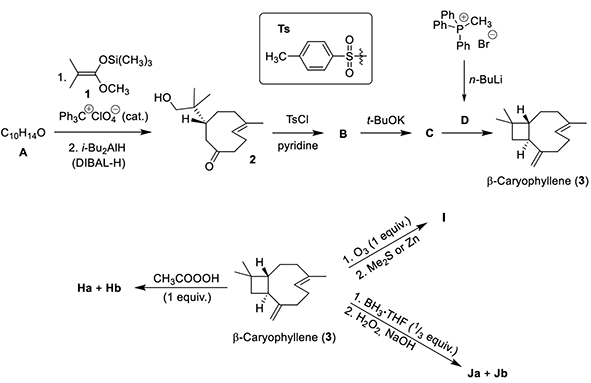 The emphasis of the problem is on the chemistry of double bonds and the stereochemistry of products obtained through the reactivity of these bonds when they are contained within a cyclic structure. For example, ring strain in β-caryophyllene makes the endocyclic double bond more reactive than the exocyclic. The nine-page problem also tested knowledge of common synthetic transformations, such as nucleophilic substitution, epoxidation, and ozonolysis. And students were asked to consider the reactivity of β-caryophyllene with deuterated chemicals and to find the products of acid-catalyzed cyclization.

Once the exams are completed and marked, what rewards await Olympiad competitors? A grand ceremony in Prague’s historic Rudolfinum celebrated success in Olympic style: 35 students received gold medals, 65 silver, and 95 bronze. Special awards also went to the top scores in the theoretical and practical exams, and in the overall competition. And once back home, it is not unusual for medal winners to be celebrated on a national level.

Aside from the immediate recognition that comes along with medals and prizes—and a big party, of course—there are also long-term advantages. IChO students often go on to become professional chemists and teachers of chemistry, as Holzhauser, Putala, Ménová, Szabó, and Šimůnek themselves have done.

From Ménová’s point of view, the IChO is an event that opens doors into the future. For a brief time students share a formative chemical-themed experience with like-minded individuals, and such memories are enduring. “Many friendships are formed during the competition,” she says, “and some last for years.”

Each day of the IChO50 is documented in Catalyzer magazine and more information can be found on Facebook and Instagram. A brief history of the IChO and the video screened at the closing ceremony of IChO50 are available on YouTube.

IChO50 problems and solutions, as well as event photographs, are published in ChemViews Magazine with the express permission of the IChO50 team.