At the local IUPAC Global Women’s Breakfast at the offices of Wiley-VCH in Weinheim on February 12, 2019, we were able to bring together twenty female scientists at different stages of their careers, both in science and scientific publishing. Sponsored by ChemPubSoc Europe, we welcomed seven guests from the Technical University Darmstadt, Germany, the Karlsruhe Institute of Technology (KIT), Germany, and the Nesmenayov Institute of Organoelement Compounds, Russian Academy of Sciences.

During the event, experienced editors Ganna Lyashenko and Francesca Novara gave the participants an insight into their daily work and tips on how to improve their scientific writing. In addition, Eva E. Wille, Vice-President Executive Director of Wiley-VCH, shared her personal experience in scientific publishing, and gave a broad overview of the company’s activities during a tour of the premises. 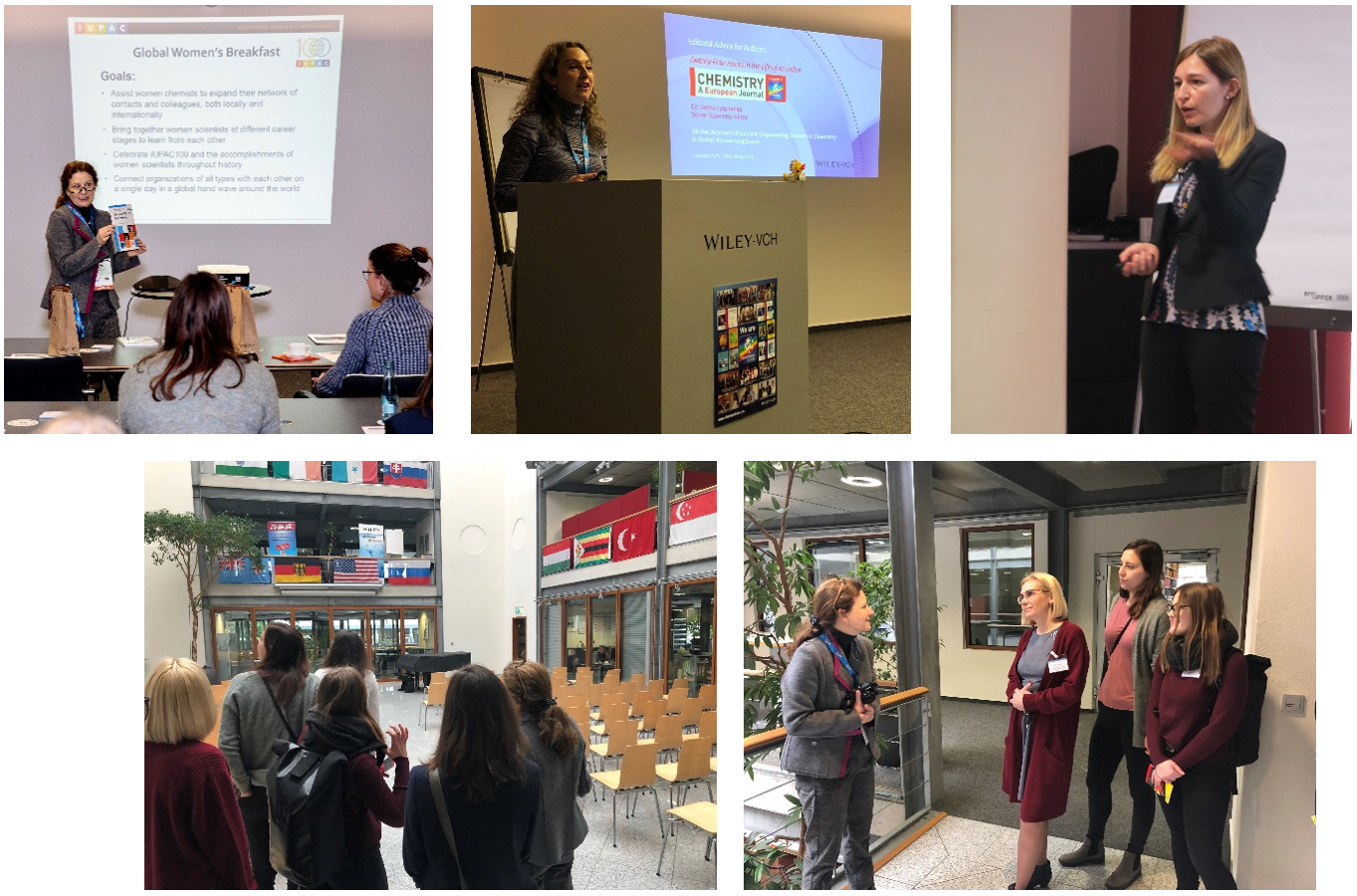 Over coffee, we had a networking session, in which lively discussions took place. Our attendees were very interested in learning about the daily work of an editor, and getting information about scientific publishing as a career path for chemists. They were pleasantly surprised to learn that editors can take up on additional responsibilities closely related to scientific publishing in areas like marketing, liaising with scientific societies, and strategy development. Furthermore, they highlighted the high ratio of females at Wiley-VCH at every career stage and the compatibility of editorial work and family life.

We had attendees at very different career stages: M.Sc. students, Ph.D. students, and principal investigators (PIs) came together with both new hires and experienced scientific editors to exchange experiences and points of view on the general topic of career development of female scientists. Some of the attendees mentioned that the interest among M.Sc. and Ph.D. students in participating in activities outside their research topics is rather limited. Many are not aware of the need to network and get informed about career paths different to those considered traditional for chemists. Furthermore, they recognized that many PIs do not encourage their students to take part in initiatives aimed at helping them acquire soft skills for the advancement of their careers once they graduate, which is particularly important for female graduates.

Among the attendees, one senior colleague reflected on the need of initiatives specifically directed at female scientists. She suggested that topics such as the balance of career and family life should not be exclusively discussed in female-oriented forums, since the topic is not relevant for every female scientist, and male scientists should also have the chance to contribute to the discussion.

The participants greatly enjoyed the event. “For me, it was particularly interesting to visit VCH-Wiley, to see how everything is organized and how people work.”, one participant said. “Networking is a very fundamental part of a career in any area, which seems to be often underestimated, particularly by women. This was also pointed out by Dr. Wille in her talk. Therefore, events like this one may help to develop and encourage young female scientists.”, another participant added.

They thought organizing a global event dedicated to female scientists has been a great initiative of IUPAC. “It stimulates discussions and awareness on this important topic.”  One participant suggested that “Equality work shouldn’t stop at the promotion of women. There are other factors that can place you in a disadvantageous position in science, like social status, nationality/being part of an ethnic minority, or being LGBT+ [lesbian, gay, bisexual, transgender/transsexual plus; comment of Editor]. People in these groups would also benefit from initiatives directed at them.”