Cyclopropanes are important motifs in medicinal chemistry. There are several methods for their synthesis in optically pure form. Asymmetric cyclopropanations catalyzed by chiral dirhodium tetracarboxylate complexes are particularly popular and efficient.

Alois Fürstner and colleagues, Max Planck Institute for Coal Research, Mülheim an der Ruhr, Germany, have improved this reaction. The team has discovered that replacing one of the two rhodium atoms of the precatalyst [Rh2(PTTL)4] (PTTL = N-phthaloyl-tert-leucinate) with bismuth improves the asymmetric induction. The modified precatalyst, [BiRh(PTTL)4] (pictured) was prepared by mixing [BiRh(TFA)4] (TFA = trifluoroacetate) with the PTTL ligand.

The team compared the dirhodium and the bismuth-modified precatalyst using the asymmetric cyclopropanation of different styrene derivatives. They found that the bismuth replacement significantly improved the reaction’s enantioselectivity. The large bismuth center creates a chiral pocket around the reactive rhodium center that is narrower than in the original dirhodium complex. The bismuth site itself is unreactive and does not catalyze any side reactions. This strategy of using heterobimetallic complexes is an unusual approach to catalyst optimization. 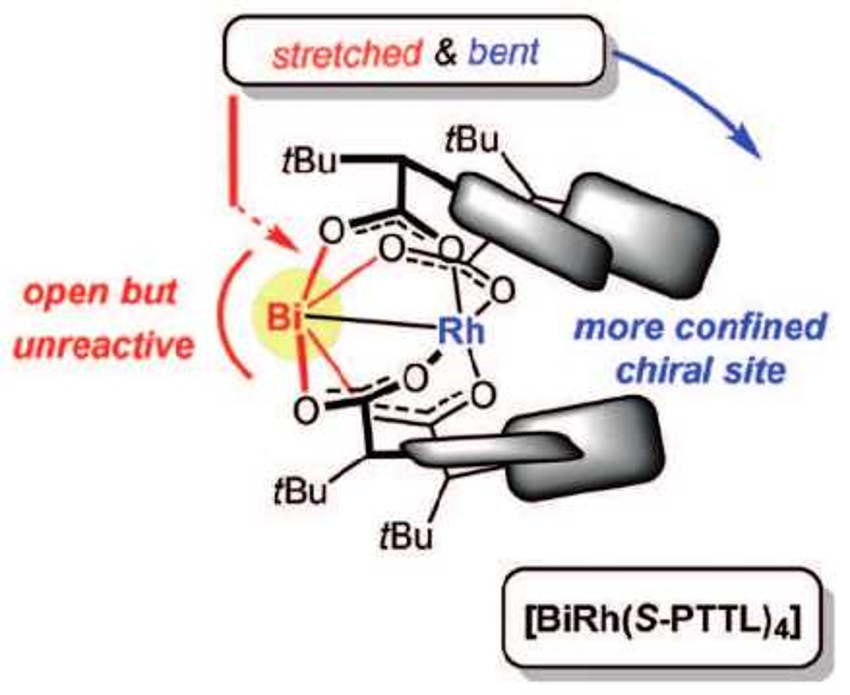