The latest issue of CHIMIA, the membership magazine of the Swiss Chemical Society (SCS), is dedicated exclusively to the research of promising young scientists. Selected Ph.D. students from Switzerland present their work in 17 freely accessible scientific articles.

All of them were selected at the Swiss Chemical Society (SCS) Fall Meeting, which took place in 2018 at Ecole polytechnique fédérale de Lausanne (EPFL). It is one of the largest recurring meetings for the chemical sciences in Switzerland. In 2018 almost 900 participants from academic institutions and the chemical/pharmaceutical industry attended, and more than 400 poster contributions and 100 oral communications were presented, spanning all fields of chemistry from fundamental studies to applications in devices, drug development, and nanomaterials. For young researchers, the SCS Fall Meeting offers an excellent opportunity to share their recent scientific achievements with the larger community and to broaden their professional network. 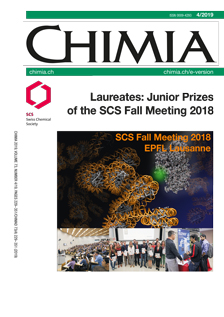 First introduced in 2002, the award programs have become a key element of the Fall Meeting. The Award Ceremony is the last item on the agenda of an intense day, and certainly one of the meeting highlights.

One Example: Enriching the Toolbox for Colloid Synthesis

To pick one article as an example: Chengjun Kang, Zurich University of Applied Sciences, Switzerland, describes an alternative method to synthesize anisotropic particles with complex geometries and tunable surface morphologies to enrich the toolbox for colloid synthesis. Together with his colleagues, he has used atom transfer radical polymerization (ATRP) to grow nano- and micro-sized colloidal architectures directly from snowman-shaped Janus nanoparticle seeds (JNPS) by controlled radical polymerization. By doing so, they expand the scope of ATRP applications: Previously, ATRP has mainly been used for the synthesis of well-defined polymer chains both in solution and on the surface of materials.

In their work, the researchers incorporated an ATRP initiator into the solid bulk of a JNP. JNPs have at least two distinct chemical and/or physical properties on different sides of the same particle. Compared to conventional homogeneous nanoparticles, they have a much wider application potential in many fields.

During polymerization, monomers continuously add to the initiator containing the JNPS lobe. Growth conditions are controlled mainly through the interaction strength between the monomer and the JNPS. This leads to a variety of colloidal architectures, including dish-, basket, cocoon-, flower-, helmet- mushroom-, dumpling-, and pumpkin-like geometries. Furthermore, each of these grown architectures has different surface morphologies, including smooth, island, and grouped-island nanostructures.

Kristýna Kantnerová was awarded the prize in Analytical Sciences. Kristýna originates from the Czech Republic and is undertaking her Ph.D. research in the group of Dr. Joachim Mohn at EMPA Dübendorf and Professor Stefano Bernasconi at ETH Zurich. His article looks at quantifying isotopic signatures of N2O using quantum cascade laser absorption spectroscopy (QCLAS).

The prize in Catalysis Science & Engineering went to Lucas Foppa. After studying in Brazil and France, Lucas did his Ph.D. studies in Professor Aleix Comas-Vives’ group at ETH Zurich. He is currently a Swiss National Science Foundation post-doc at the Fritz-Haber Institute in Germany. In his article, Lucas focusses on what we can learn from first principles multi-scale models in catalysis and presents a case study on the role of the Ni/Al2O3 interface in water-gas shift and dry reforming.

Ganna (Anya) Gryn’ova received the prize in Computational Chemistry for research done in Professor Clémence Corminboeuf’s group at the EPF Lausanne. She received her Ph.D. from the Australian National University, was a recipient of a Marie Sklodowska-Curie Actions individual fellowship and is now a group leader at the Heidelberg Institute for Theoretical Studies, Germany. Ganna discusses the common molecular features and the related chemistry concepts across several different areas of organic electronics, including molecular semiconductors and single-molecule junctions, in her article.

Christopher Gordon studied at ETH Zurich for his Bachelor and Master’s degrees and is now working on his Ph.D. in the group of Professor Christophe Copéret. He was awarded the prize in the Inorganic & Coordination Chemistry section. Gordon discusses in his article why we should care about chemical shift tensors.

Fabio Steffen graduated from the University of Zurich in 2015 with a Master’s degree in Biochemistry. He is currently pursuing his Ph.D. studies in Professor Roland K. O. Sigel’s group at the University of Zurich and was awarded the Medicinal Chemistry & Chemical Biology prize. Stick, Flick, Click: DNA-guided Fluorescent Labeling of Long RNA for Single-molecule FRET (fluorescence resonance energy transfer) is the title of Fabio’s article.

The Organic Chemistry prize was awarded to Daria Grosheva, working in Professor Nicolai Cramer’s group at EPF Lausanne. She started her studies in Russia before moving on to the USA and France. In mid-2019, she will take up a Swiss National Science Foundation (SNF) post-doctoral position at Princeton University, NJ, USA. Daria investigates unconventional electrophiles in enantioselective Pd(0)-Catalyzed C–H functionalizations.

Irina Ritsch, originally from Austria, was awarded the prize in Physical Chemistry for her presentation of research on electron paramagnetic resonance (EPR) methods undertaken in the Professor Gunnar Jeschke group at ETH Zurich. Irina uses pulsed EPR methods to study biomolecular interactions. In her article, she outlines necessary considerations for measurements of distance distributions in macromolecular systems labelled with two or more different types of paramagnetic centres.

Laura Neumann was awarded the Polymers, Colloids & Interfaces prize for research carried out in the group of Dr. Stephen Schrettl at the Adolphe Merkle Institute, University of Fribourg. Laura undertook her Bachelor and Master studies in the Netherlands. In her article, Laura describes the healing of polymeric solids by supramolecular means. 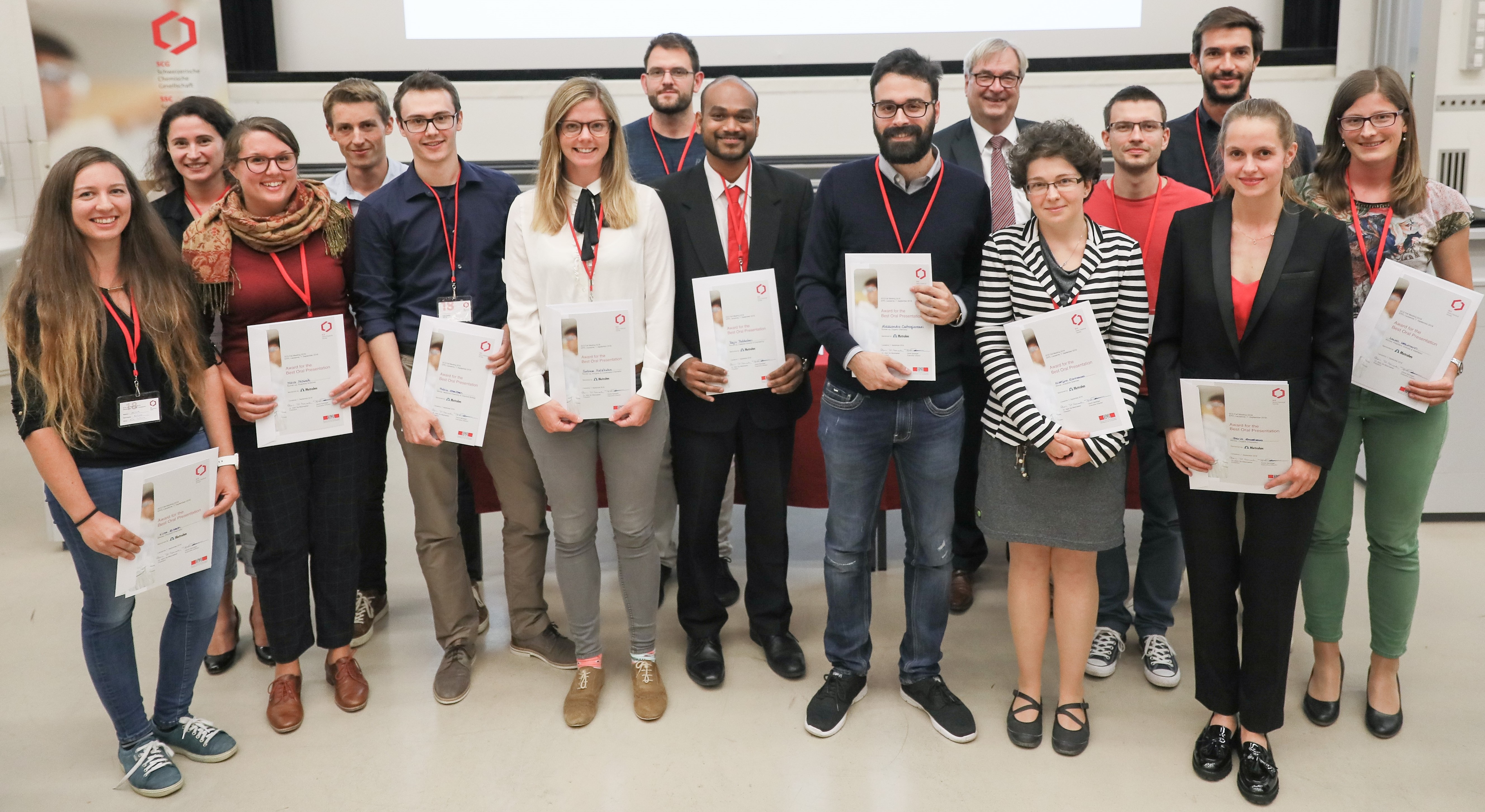 Guido Zichitella is a Ph.D. student in the group of Professor Javier Pérez-Ramirez at ETH Zurich. He was awarded the prize in Catalysis Science & Engineering for his poster presentation on the development of heterogeneous catalysis. His article focusses on the mechanistic understanding of halogen-mediated catalytic processes for selective natural gas functionalization.

Tiziana Musso is a post-doc fellow in the group of Professor Jürg Hutter at the University of Zurich after completing her Bachelor and Master’s studies in Italy and her Ph.D. in Finland. She was awarded the prize in Computational Chemistry. In a review article, Tiziana summarizes atomistic simulations in surface chemistry to interpret scanning probe microscopy images.

Philipp Melle, University of Bern, was awarded the prize in Inorganic & Coordination Chemistry for his poster on research performed in the group of Professor Martin Albrecht. He originally studied chemistry in Hamburg, Germany. Philipp describes ruthenium complexes with pyridylidene amide (PYA) pincer ligands for catalytic transfer hydrogenation of challenging substrates.

Rémi Martinent, is a Ph.D. student in Professor Stefan Matile’s group, University of Geneva, Italy, after studying chemical engineering in France. He received the prize in the Medicinal Chemistry category. Rémi describes the cellular uptake mediated by cyclic oligochalcogenides.

Rebecca Schäfer was awarded the prize in Chemical Biology for her poster depicting her Ph.D. research performed in the group of Professor Helma Wennemers, ETH Zurich. She previously studied in Heidelberg, Germany, with extended stays in France and USA. Rebecca’s article features recent advances in bioorthogonal reactions.

Daniel Čavlović studied chemistry at the University of Basel and then joined the group of Professor Michal Juríček at the University of Zurich as a Ph.D. student. He was awarded the prize in the Organic Chemistry section. Daniel looks at molecular magnetic switches in his article.

The Polymers, Colloids & Interfaces prize was awarded to Chengjun Kang for his poster describing Janus seeds. Chengjun is a post-doctoral scientist in the group of Professor Andrei Honciuc at the Zurich University of Applied Sciences after obtaining his Ph.D. from ETH Zurich. Chengjun describes a diversity of asymmetric nano-/microcolloidal architectures grown by atom transfer radical polymerization (ATRP) from janus seeds in his article (see above).