Dr. Anne Deveson, Deputy Editor of Chemistry – A European Journal, talked with Professor John Gladysz, Texas A&M University, College Station, USA, about his recent article on the synthesis of rotaxanes with dimetallic polyynediyl axles and their properties as insulated molecular wires. The work was recently published in Chemistry – A European Journal. 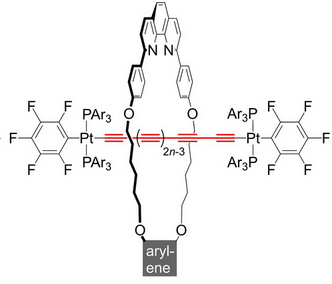 The steric protection or “insulation” of the linkers in complexes in which unsaturated linkers (pictured in red) bridge two metals can suppress linker/solvent and linker/linker reactions. This can lead to longer-lived species. Dimetallic polyynediyl complexes, LmM(C≡C)nMLm, contain the most fundamental unsaturated carbon linkers. John Gladysz and his group have been synthesizing long conjugated polyynes with transition metal endgroups since the 1990s. Their aim is to sterically protect or insulate the sp-carbon chains of the linker. Every study directed at insulated molecular wires gives new insights as to how to optimize steric and electronic shielding in these molecules.

Why do molecular wires need isolation?

In the universe of molecular machines, there are numerous outstanding achievements and proof-of-concept studies. But in many of these, the “wrapper” or “packaging” is forgotten.

To take an easily visualized example: What practical good is a (molecular) elevator without a defined shaft that would keep a payload from falling out? There are many molecular rotors in which gearing has been established, but in the real world, an unprotected or “open” gearbox is extremely hazardous.

My co-workers and I continue to explore additional strategies for “insulated molecular wires”. One of these has in fact rendered the one-electron oxidation products of metal-capped polyynes considerably more stable.

What fascinates you most about your work?

Miniaturization is driving an incredibly broad range of technology these days. Anything one can make smaller can lead to a host of benefits. And for most devices, particularly those that qualify as machines, the molecular level represents the ultimate in miniaturization.

Macroscopic gyroscopes have a host of commercial applications, usually to sense orientations such as in space stations, torpedo warheads, and mobile phone displays. Molecular gyroscopes would be particularly apropos for nanoscale drones and sensors.

What is the focus of your work?

We are specialists in synthetic organometallic chemistry, which means using the unusual architectures afforded by metals and their unique coordination geometries. We are also opportunistic, and have for some time sought to contribute to the field of molecular devices, specifically with metal-containing components.

In this regard, we are somewhat like what Nobel Laureate Donald J. Cram used to call “prospectors”: We have a specific expertise rarely found elsewhere, and seek contemporary applications, as opposed to the type of scientist that first defines a problem and then goes about trying to solve it by any approach possible.

Which part of your work proved the most challenging?

Well, for several reasons that come up regularly in academic laboratories, the work had to be carried out over a longer time frame than necessary. Perhaps one benefit of this is that nearly all results were repeated multiple times.

Also, the presentation of a large amount of structural data can be a big headache, and this was a lot of work for several of the authors. There are many features to be analyzed, and how these are parsed between the main text and supporting information is a major chore.

Many do not realize that the software used by crystallographers in generating CIF [crystallographic information file] files does not allow one to go back and change the atom numbers. So the same structural unit could be Pt1-C1-C2 in one complex but Pt4-C30-C31 in another, meaning manual renumbering of atoms for nearly all compounds.

On the experimental side, three of the rotaxanes could only be accessed in 9 to 12 % yields. This required stockpiling. Also, I have to remark that I am always amazed by those rare co-workers who seem to be able to crystallize almost everything. This had the potential to be a big roadblock, but these key authors came through.

What is the longer-term vision for your research?

This was a proof-of-concept paper, meaning much more needs to be done. Upon oxidizing the title molecules, some irreversible process occurs, probably involving the macrocycle – which is unsaturated and has functional groups – and the axle. Methods are needed for making rotaxanes where the macrocycle is less functionalized. Ideally, a saturated cyclic hydrocarbon, although I would also be happy with a cyclic benzenoid system.

In general, my co-workers and I see “long” metal-capped polyynes as exciting scaffolds for things like molecular polygons, three-dimensional variants in which out-of-plane turns have been forced, and one-dimensional polymers or oligomers. We have been in Texas for nearly twelve years. So by now we have also assimilated the regional “bigger”/”longer”/”faster” mindset into our vision.

The article they talked about