Dr. Ruben Ragg, Editor in Chief of ChemBioChem, created ChemBioTalents in 2018 to promote outstanding early career researchers. Here he talks to Anna Rustler for ChemViews Magazine about his motivation and experiences with the program, about bias in science, and many lovely and amazing people.

Throughout 2019, ChemBioChem promoted a special collection named ChemBioTalents. What is it and can you tell us something about it?

ChemBioTalents is an invited collection of papers by early-career researchers working at the interface of chemistry and biology. The idea for this basically emerged right after I joined ChemBioChem.

I was attending several conferences earlier in 2018 and had the chance to chat with quite a few early-career researchers. I was surprised that the overall feedback was that most of them struggle to get their papers published, especially in high-impact journals, not only because of critical referee reports but also direct rejections. And that struck me because I think these young researchers are our future, they have very, very innovative ideas, and we should support them wherever we can.

So, I thought it was a good idea to create this issue to highlight what these scientists are doing and promote them and the research they are doing in the best way possible. 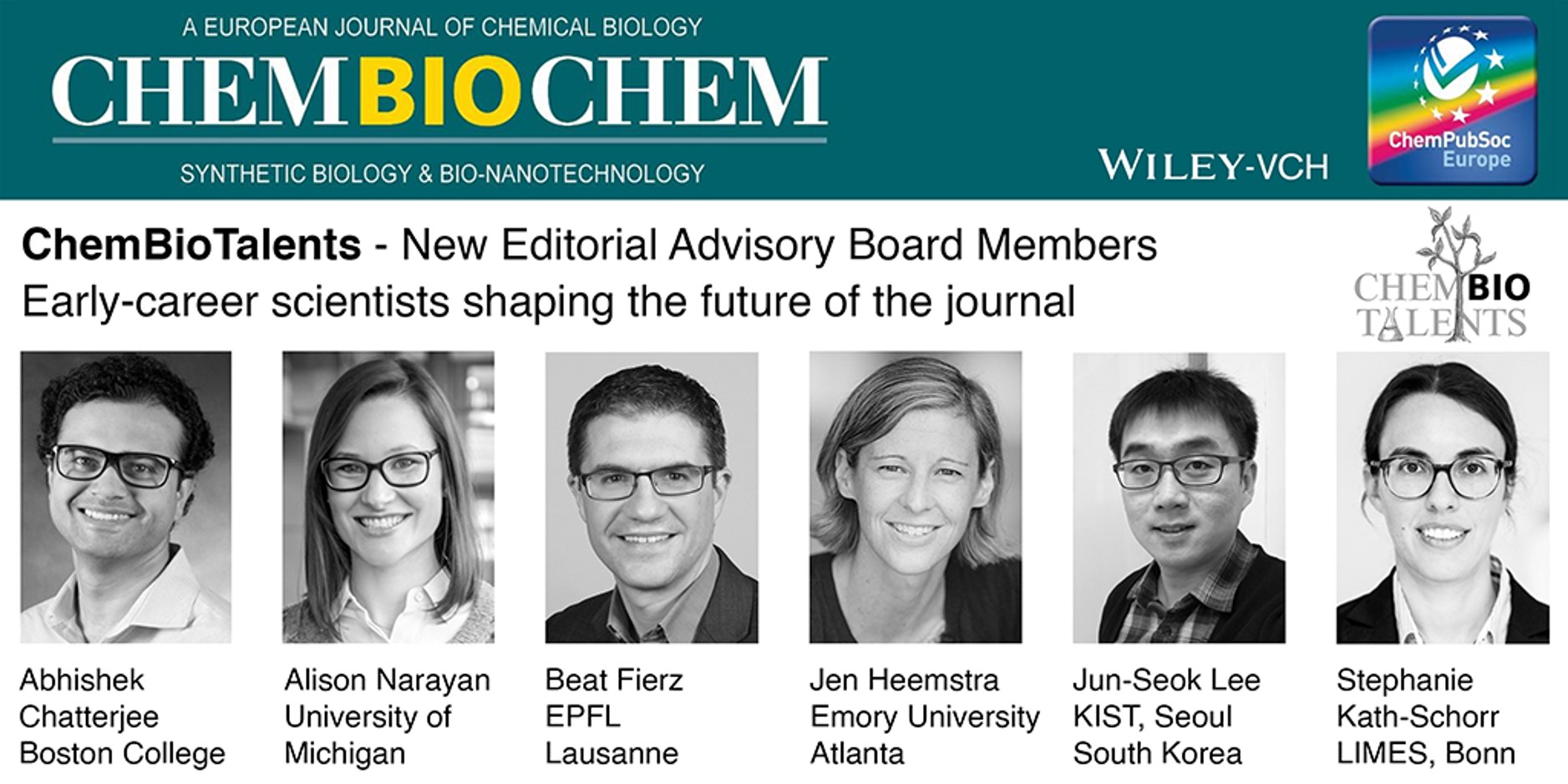 Why is this important to you?

In my opinion, many, many innovative ideas come from researchers at the start of their careers. These are, more often than not, groundbreaking ideas that need to get out to the community as quickly as possible. In particular, with papers or research findings that challenge a current belief, early career researchers can struggle to get them published because there might be conflicting ideas and opinions.

And why do you think young researchers should get more attention? Because they have these ideas or are there other reasons too?

There is sometimes bias towards more established researchers, which is unfortunate and shouldn’t be the case. This is something I consider very critical. It sometimes might be easier to make a decision when a paper is from someone you personally know and if that person is also very respected in the field. One can be quite sure that the get quality of the manuscript is going to be alright.

It is a different story when you get something from a person you don’t know, especially if the research topic is so new that there is not much out there to compare it to. It is exactly this bias we need to tackle because, in the end, we need these new ideas to further promote research and science as a whole!

Also, if you look at the structure of our editorial boards in terms of age or career status, there is a tendency towards people that are more established. This is something that needs to change, and we need to get early-career researchers more involved in active decision making within the journals. This is especially true because times are changing.

Ten years ago, most journals were printed, now, basically almost all are online only. Publishing as a whole is changing rapidly, the way most people are “consuming” research articles is likewise. Therefore, we need those young people involved to find a way to still be able to reach this up-and-coming generation of scientists. And that is exactly why, after the success of  ChemBioTalents, we decided to promote six of those who participated in the issue to full editorial board members.

How did you find your ChemBioTalents?

That was actually very interesting and one of the main reasons why ChemBioTalents worked so well. The first thing that popped up before the whole idea of the special issue was thought through was the name, ChemBioTalents. It is simple and tells you straight away what this is about, talented researchers in chemistry and biology.

When I started at ChemBioChem, I thought a lot about how to interact more with our editorial board members. ChemBioTalents seemed to be a good start. The idea was to ask all our board members, so roughly 70 people, to nominate up to five talented researchers who were within the first seven years of their independent career. The feedback was overwhelming, we got 180 names! 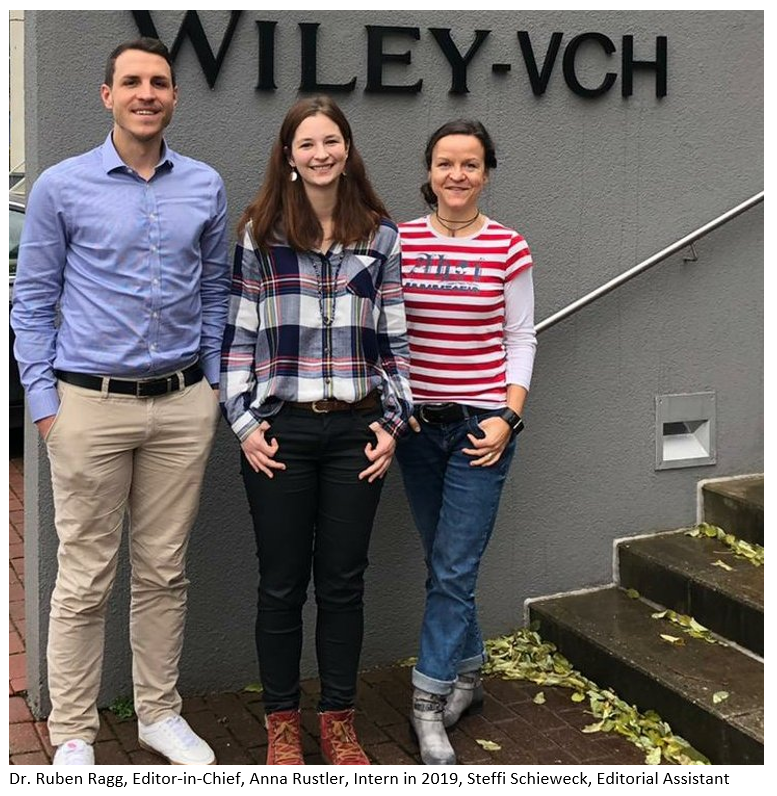 Out of those 180 that were invited on behalf of the board member who nominated them, 140 agreed and slightly more than 100 delivered. The acceptance rate within the issue was more than 95 %, just to give you a glimpse of the quality of this.

The outreach of ChemBioTalents is even bigger when you consider how much ChemBioChem publishes; we usually have around 300 papers a year and 100 of those, in addition, were ChemBioTalents. Supporting early-career researchers will become a general theme of the journal in the years to come.

How was this special issue received in the academic world?

I think the overall message from the community was that people liked it. In particular, involving early-career researchers in the publishing business as early as possible, for example by promoting them onto editorial boards was very well taken. To me, this was somehow obvious, but unfortunately, this seems not to be so common. Given the changing publishing landscape, the views and opinions of early-career researchers are so important and valuable.

What did you enjoy most?

Publishing is a people business, and I enjoyed the interactions with the ChemBioTalents. This was very refreshing, very personal, and the scientific content was great.

What advice would you give young researchers who are just starting in their independent careers?

This is difficult to judge from my end because I left academia. One thing that becomes more and more important, even with the almost unlimited opportunities of the internet, is to make sure that your target audience finds your papers. Use social media to interact with your community and with your colleagues.

Times are changing … maybe 20 years ago or so, when you wanted to read a paper you had to go all the way down to the library and after that never-ending journey, you would read the paper from start to end. But now, there is just so much being published that it’s impossible to read all of this and stay up to date. As a researcher, you need to “help” readers find your paper.

In addition to promoting your research by using social media, the most important thing is to make sure that the titles and abstracts in your papers are crystal clear and sharp (with the right keywords) so that people find your work when they search for it. The language should also be as simple as possible as publishing is an international business. Most of the people that read your papers are non-native speakers, so keep it simple. In this modern world with so much going on, it is easy to get distracted. It is quite likely that when someone opens a paper and does not directly understand what’s going, that person might just stop reading and look somewhere else.

So summed up, here is my piece of advice: simple language, social media, high-quality abstracts and titles, and neat figures. In the end, even if your paper is published in a more specialized journal, due to the benefit of technology, potentially anyone can find it.

You talked about what has changed in publishing, what still needs to be changed for publishing to be more modern and up to date in today’s world?

People talk about peer review, that it should be more transparent, and I agree. But still, one should be somehow aware that if it is fully transparent referees might not be as critical. Which, again, some others might say it is good because the feedback will inevitably be more constructive. In my opinion, a good compromise would be to additionally publish anonymized reviewer reports along with the author’s replies. That is something I am a huge fan of.

Also, I think the overall system needs to be simpler. Most current editorial systems are quite clumsy and a lot of work is needed to submit a paper. This time spent would be much better invested elsewhere. I would really love something like a one-click submission.

So, you left academia to work in publishing. What got you interested in this and how has your career developed so far?

When I was at the end of my Ph.D., I wasn’t sure what I wanted to do. I knew industry wasn’t my thing, but I wanted to stay in touch with fundamental science. So, it was maybe a 50/50 decision to stay in academia or do something else. A friend of mine was working at Wiley-VCH in Weinheim as a professional editor at one of the Advanced Materials journals. This was basically the reason I knew that this job opportunity existed. I had a look at Wiley’s open positions, gave it a shot, and it worked out.

Back then I didn’t know if this was the right move for me, but looking back at the past years it definitely was. A good year or so after I joined Wiley-VCH as an editor at Chemistry—A European Journal, I got the chance to join ChemBioChem, and it has been a hell of a ride! It’s reading all these great papers, even before they are officially published, and the personal contacts that I make basically every day that keep me going. You meet so many lovely, amazing people. It is just a lot of fun.

Ruben Ragg studied biomedical chemistry at the Johannes Gutenberg University Mainz, Germany, and graduated under the supervision of Klaus Müllen. He obtained his Ph.D. from the Max Planck Graduate Center Mainz working with Wolfgang Tremel on enzyme-mimetic catalysis in 2016. He joined Wiley-VCH, Weinheim, Germany, in 2016, initially for Chemistry—A European Journal and ChemistrySelect. He switched over to ChemBioChem in 2017 and has been its Editor-in-Chief since January 2019.