The photoreduction of CO2 to CO using visible light is a way to convert the greenhouse gas into value-added products. CO can, for example, be transformed into hydrocarbons via the Fischer–Tropsch process. Efficient and robust catalysts for CO2 photoreduction would, thus, be useful. Ionic liquids (ILs) have been found to be good absorbents for CO2, which means incorporating ionic groups into the catalyst design could be helpful.

Liang-Nian He, Nankai University, Tianjin, China, and colleagues have developed a rhenium catalyst with an ionic secondary coordination sphere for the photoreduction of CO2 to CO under visible light. They investigated Re catalysts with different ionic ligands (examples pictured below) and found that {Re[BpyMe(tris(2-hydroxyethyl)amine)](CO)3Cl}Br (Re-THEA, pictured) gave the best performance with up to 34 % quantum yield. This catalyst was synthesized from the corresponding 2,2′-bipyridine derivative and Re(CO)5Cl in toluene. 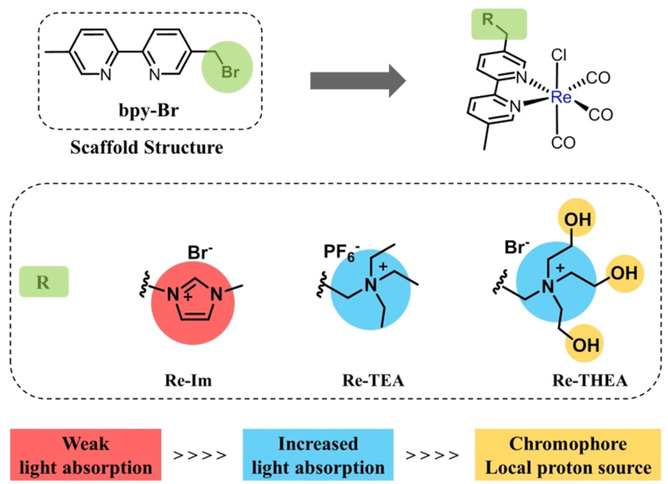 The role of the ionic tris(2-hydroxyethyl)amine group (THEA) in the catalytic cycle was investigated using UV-Vis spectroscopy and density functional theory (DFT) calculations. The results indicate that THEA enhances visible-light absorbance, stabilizes the reaction intermediates, facilitates the reaction through hydrogen-bond formation, and suppresses the formation of Re–Re dimers via steric effects. According to the researchers, the work could help with the development of other efficient catalysts for photochemical CO2 reduction.