Hole-transport polymer semiconductors consisting of π-conjugated electron donor (D) and acceptor (A) units in the backbone (Type I, schematically pictured below) have been extensively investigated as p-type materials for organic solar cells (OSCs). The have advantages such as a high hole mobility and a high dielectric constant. However, the majority of Type I polymers have narrow band gaps and high HOMO (highest occupied molecular orbital) energies, which are incompatible with commonly used high-performing n‐type materials.

Yuning Li, University of Waterloo, and Jinliang Wang, Henan Academy of Sciences, and their colleagues have developed a new  Type II donor–acceptor polymer design (pictured). The polymer, poly(3‐(([2,2′:5′,2”‐terthiophen]‐3‐yl‐5,5”diyl)methylene)‐1‐(2‐octyldodecyl)indolin‐2‐one) or PTIBT, has a backbone made only from donor units (thiophene), combined with side chains that contain acceptor units (indolin-2-one). PTIBT was synthesized in only three steps: a dibromination of 3‐thiophenecarboxaldehyde, a Knoevenagel condensation with 1‐(2‐octyldodecyl)indolin‐2‐one, and finally a copolymerization with 2,5‐bis(trimethylstannyl)bithiophene under Stille coupling conditions.

PTIBT has a very high dielectric constant of 7.7, which is beneficial for the diffusion of the electron/hole pairs. It also has a lower HOMO energy level and a wider band gap compared with the corresponding Type I D–A polymer. OSCs using PTIBT and a typical n-type material show promising performance. According to the researchers, the type-II polymer design could be useful in the development of high-performance and low-cost polymer materials for OSCs. 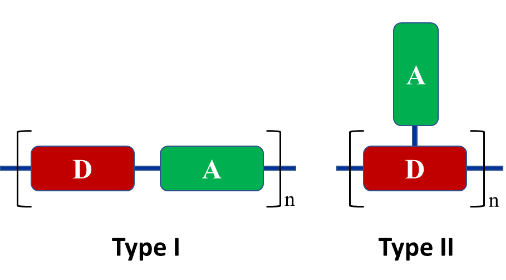