Certain cryptands (example pictured above) show a special type of stereoisomerism, in which substituents or lone pairs at the bridgehead atoms can point either into the cryptand’s cavity or away from it. Such large macrocycles can invert between these out,out- and in,in-isomers via a so-called homeomorphic isomerization. In this process, both bridgeheads invert by pulling one chain through the ring defined by the other two—without any bonds breaking. 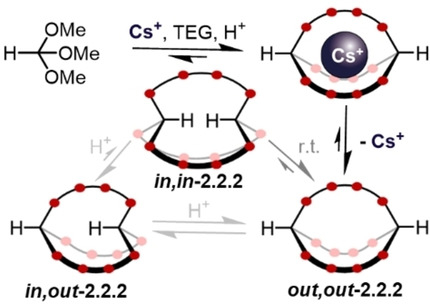 The team found that a third in,out-stereoisomer was formed when trifluoroacetic acid (TFA) was added to induce dynamic exchange of the orthoformate. The system could be driven to this in,out-state by using a smaller sodium metal template. The size of Na+ is a mismatch for the cavity of the out,out-stereoisomer, and thus, using sodium ions favors the formation of the in,out-cryptand.

In addition to experiments, the team used density functional theory (DFT) calculations and molecular dynamics (MD) simulations to better understand the systems. The animated gif below, for example, shows the homeomorphic inversion of an orthoester out,out-cryptand to its in,in-isomer via a representative pathway based on MD simulations.