Professor Sir John Meurig Thomas is a leading British chemist in the fields of heterogeneous catalysis, solid-state chemistry, materials sciences, and surface chemistry. He has written over a thousand scientific articles and several books.

In April his latest book “Architects of Structural Biology: Bragg, Perutz, Kendrew, Hodgkin” was published [1]. In the book, Sir John reports on the emergence of the field of structural biology and the discoveries made at the Laboratory of Molecular Biology in Cambridge, UK, as well as on the personal interactions between these 20th-century scientific pioneers. Many of these stories stem from his personal experiences. 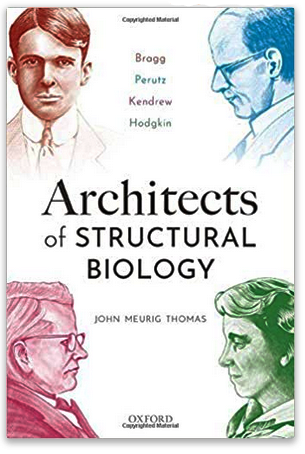 Here, Sir John Meurig Thomas talks to Dr. Vera Koester for ChemistryViews about his motivation to write about scientific pioneers, success, and the power and beauty of stories.

Can you tell us in a few words what the book is about?

It is about the emergence of one of the most important subjects in modern science: molecular biology. And it deals with four amazing Nobel Prizewinners, three chemists (Max Perutz, John Kendrew, Dorothy Hodgkin), and a physicist (William Lawrence Bragg).

What was your idea behind the book?

I wanted to tell, in non-technical terms, the impressive story involving personalities and some rivalries. There is something interesting about all of us. But some great scientists are teeming with interest – like Linus Pauling, whom I also describe in my book, and his rivalry with Sir Lawrence Bragg.

What was the rivalry between them?

They were both brilliant crystallographers. Bragg was ten years older than Pauling. Bragg was at the Cavendish Laboratory at the University of Cambridge and Pauling at the California Institute of Technology (Caltech) in the US. Pauling was an exceptionally able man. He is probably the cleverest chemist of the 20th century. As a young man, he started studying the structure of silicate minerals. Bragg had solved many of these structures already. However, Pauling, by using his superior knowledge of quantum mechanics and chemistry, was able to rationalize and categorize and put into tidy compartments all the different kinds of silicates. Chain silicates, sheet silicates, 3D silicates, zeolites, and so on. He was using as much of Bragg’s data as he was of his own, as the data was published. Bragg felt annoyed that he wasn’t so smart to be able to do that. That was the beginning of the rivalry.

To come back to the idea behind the book: Most structural biologists are unaware that the origins of their work started amongst mineralogists in Cambridge and physicists in the Royal Institution of Great Britain in London, and also in the California Institute of Technology in Pasadena, USA.

John Desmond Bernal did his Ph.D. in the Royal Institution. Then he came to Cambridge and he was appointed to the mineralogy department. And that is where Dorothy Hodgkin and Max Perutz started. They did their Ph.Ds. in mineralogy, in earth sciences; Dorothy Hodgkin under the supervision of Bernal, Max Perutz completed his Ph.D. under Bragg.

How did you choose who to cover in the book? Why not Francis Crick, James Watson, or Fred Sanger?

None of these three contributed quite as much as the four that I describe. I knew very well three of the four people because I was once Director of the Royal Institution in London and was a successor-but-one to the fourth, who did their beautiful work.

I knew Perutz and Kendrew who hired Crick and Watson, whom I also got to know. Their role was as collaborators in the group led by Perutz, Kendrew, and Bragg. Crick and Watson have a special place in describing heredity (via DNA). But there are vast topics in molecular biology that were really sorted out first by Kendrew, Perutz, and Bragg. Hodgkin was a brilliant loner.

Four brilliant scientists, three Chemistry Nobel Prize winners and one Physics Nobel Prize Laureate, three men and one woman. What was the main difference between the four?

They were all very different from one another. The main difference between Kendrew and the other three was that he was more mathematical. He was ahead of most of the world in his deployment of fast electronic computers. Kendrew had unique insights into what X-ray crystallography, when backed with massive computational facilities, could do for biology.

The molecules of biology are very big and in order to solve their structure by X-ray crystallography, you have to do a massive amount of computing. These times it is all automatic. At that time, you had to have some of the best computers in the world. And it so happened that at that time Cambridge was developing the fastest digitalized and programmable computer in the world. Kendrew understood that. What they did was five years, at least, ahead of everyone else in the world.

Hodgkin was also much more mathematical than Bragg or Perutz. She wasn’t quite as brilliant mathematically as Kendrew but she was highly competent. And, furthermore, she had a greater intuition than perhaps any of the four of them. Thereby she was able to solve the structure of penicillin, of vitamin B12, of insulin. This was the insight of a superb crystallographer.

Perutz was a brilliant, impressing leader and organizer. Lawrence Bragg had unique insights particularly important for the early development of X-ray crystallography.

How did they achieve their success?

By relentless pursuit of their goals. Hodgkin, for example, by determining the structures of a series of important molecules like Penicillin, vitamin B12, and the first-ever steroid, cholesteryl iodide.

They were all greatly influenced by the polymath J. D. Bernal. Bernal, a physicist by training, was one of the most brilliant individuals of the 20th century. A massive intellect. Also a penetrating crystallographer and one of the most inspiring scientists.

J. D. Bernal taught Hodgkin as a Ph.D. student and Perutz, who followed her. He was very knowledgeable about pretty much everything: modern art, architecture among many other topics and he was a brilliant crystallographer. Dorothy Hodgkin adored him all her life. She wrote a 60 or 70-page obituary on him for the Royal Society describing all his brilliant science and how quick he was. For example, he realized before everybody else did that the structures of the chemicals in the body, amino acids, enzymes, steroids, and so on, needed to be solved and he realized that with X-ray crystallography you could do it. The first thing that Crick did when he heard that he won the Nobel Prize was to phone at J. D. Bernal and say, you play a big role in this. Bernal never got the Nobel Prize himself. He was a bit too disorganized.

Madame Curie was truly exceptional. Her story is very romantic, and also very telling and moving. Especially after her husband was killed, she fought against all kinds of odds and prejudices. She became a kind of figure of eminence in France and elsewhere. Marie Curie and her daughter quickly achieved iconic status. They were outstandingly able in a man’s world. And the mystery of radioactivity also played a big role.

Among scientists, Dorothy Hodgkin is not less well-known as men in her field. She was, according to Perutz, a saintly person: humane, kind, helpful to everyone, mother of three, pacifist, keen to assist any underprivileged person. But she was a brilliant crystallographer.

I wrote to her when I was a young professor in Wales and experienced her kindness. I wanted her to speak not only to the department of chemistry but to the whole university, and in the town where I was living, Aberystwyth, to schoolteachers and doctors. She was one of the busiest people in Britain, but she agreed to come.

Science has often been told as a series of stories about great personalities. Why is it important to tell the story of brilliant scientists? And is it currently a trend to look also at the unknown contributors?

I have always believed that the best kind of account one can give of a successful scientist is to give it in a story form. I did this in 1991 on Michael Faraday. The book is called “Michael Faraday and the Royal Institution: The Genius of Man and Place” [2]. Story-telling is as old as human beings. You always succeed with a good story.

It is important to recall the contributions of collaborators. Many collaborators are neglected. A very good technician can transform a scientist’s achievements. In the case of Faraday, he had very few, almost no, collaborators.

What topics interest you when you are writing?

I just concentrate on the subject and seek the most interesting ways of describing it.

I constantly write about my work and, increasingly recently, about the work of others. I have written non-technical accounts of Count Rumford, Lord Rayleigh, J. D. Bernal, J. J. Thomson, and Ernest Rutherford – all great scientists, but all quite different from one another.

Who has inspired you most in chemistry and during your career? 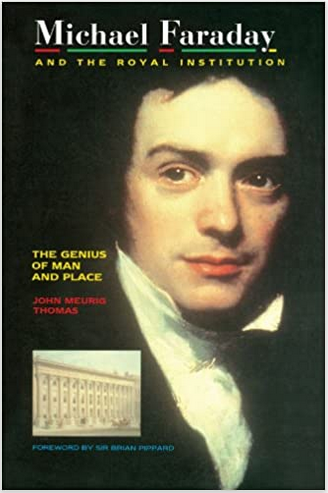 When I was a 14-year old boy I heard my wonderful physics teacher describe Michael Faraday. I became absolutely inspired by him for the rest of my life. In 1986, I became his successor in the Royal Institution. I lived in his house, worked in his study, and slept in his bed.

Faraday became, according to Rutherford, the greatest discoverer of all time. He started from nothing: He was a bookbinder’s assistant until he was 21. Then he got attached to the chemist and inventor Sir Humphry Davy, and from there on he became the most famous chemist certainly, if not the most famous scientist in the whole world. He contributed to organic chemistry, to photochemistry, to electricity, to magnetism, to optics, to all sorts of subjects. In my book on Faraday, you can find out more about him [2].

He was a religious man, a gentleman, kind, he was helpful, and he was absolutely wonderful as a lecturer, a brilliant experimentalist, and he was a visionary. He was talking about electricity and gravity way back in 1850.

What are your hopes for the future of science and scientists?

It is important that scientists should reflect and act upon the social consequences of their work.

Are you planning a new book?

I have been a University teacher and researcher for over 50 years. Nowadays I no longer do much original research. But I am eager to write more books like this one on structural biology.

I am planning to write a palatable account to the layperson of the personalities and achievements of those who lived, worked, or visited the Royal Institution of Great Britain in London. It was founded in 1799. Major tasks included the rapid and effective dissemination of useful inventions as well as enhancing the application of science to the common purposes of life.

There, great research has been done. Brilliant individuals like Humphry Davy, Michael Faraday, Sir W. H. and Sir W. L. Bragg, Lord Rayleigh, and Lord George Porter lived and worked there. And many poets, novelists, musicians, Egyptologists, politicians, and religious experts have “performed” there. I am excited by this next project.

This again sounds like a book full of interesting stories and historical events.
Thank you very much for this interview.

After a period as Deputy Pro-Chancellor of the University of Wales, Cardiff, Wales, UK, from 1991 to 1994, Thomas returned to Cambridge and served as Master of Peterhouse, the oldest college of the university, from 1993 to 2002. Since then he is an Honorary Professor of Materials Science at the University of Cambridge and Emeritus Professor of Chemistry at the Davy Faraday Research Laboratory of the Royal Institution. He continued to be active in research at the Davy Faraday laboratory until 2006.