The feeding rate of the precursor compounds plays a crucial role in the chemical vapor deposition (CVD)-based synthesis of 2D materials. Conventional feeding methods usually introduce an “overdose” of precursors. Besides the waste of raw materials, this leads to the accumulation of incompletely reacted contaminants and reduces the quality of the deposition products.

Hongwei Zhu, Tsinghua University, Beijing, China, Shun Wang, Huazhong University of Science and Technology, Wuhan, China, and colleagues have developed an improved CVD feeding method based on a sustained and controlled release of the precursor. They used a polymer matrix (a nitrile butadiene rubber-modified phenolic resin, NBR-PR) to convert the highly volatile liquid precursor acetone (Ac) into a sol (NBR-PR/Ac, pictured above on the left). At room temperature, this sol retained almost 10 % of its acetone content after 30 min (determined by weight). In contrast, neat acetone completely evaporated in five minutes under the same conditions. The team designed a simple portable feeder (pictured below) to use this sol precursor in atmospheric-pressure CVD (APCVD) processes.

Using this feeder, acetone can be released in a controlled manner and used as a carbon source to grow large-area, uniform monolayer graphene films on copper substrates. According to the researchers, this feeding approach could also be useful for the efficient production of other 2D materials by extending it to other liquid or solid precursors. 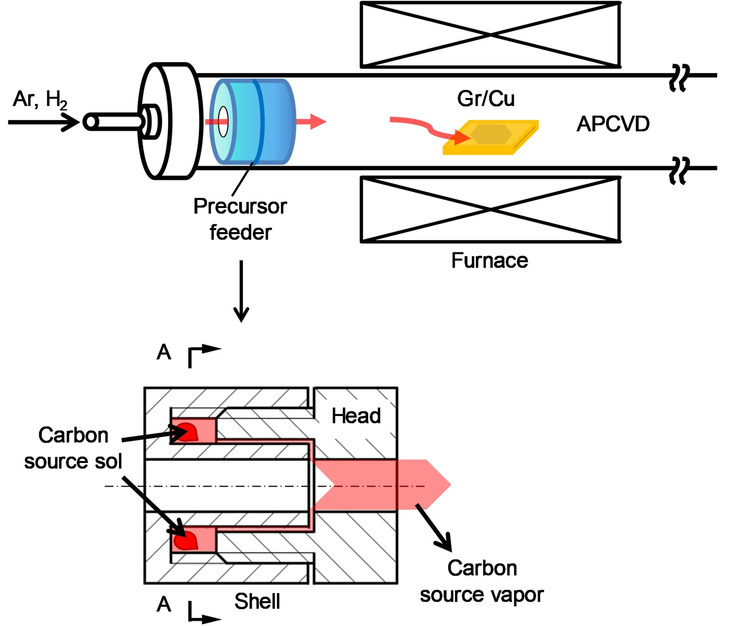