Conventional anticancer drug therapies generally kill normal cells (especially immune cells) as a side effect. Near-infrared photoimmunotherapy (NIR-PIT) using the silicon phthalocyanine dye IR700 (pictured below) bound to an antibody, in contrast, is toxic only toward cancer cells and has very few side effects. However, it is necessary to irradiate the affected area with NIR light, which has a limited penetration depth in living tissue. Thus, invasive treatment is required for deep-tissue cancer treatment. 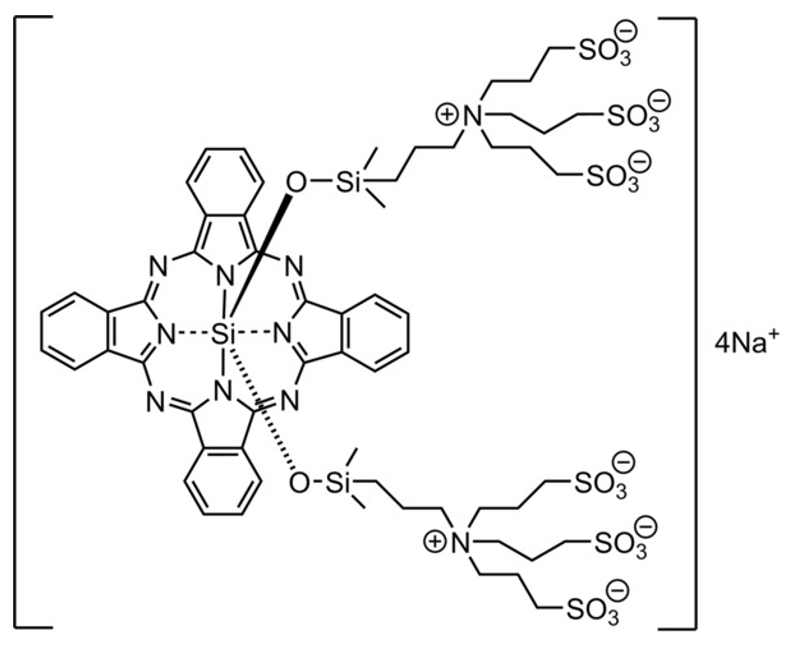 The cytotoxic effects of the dye–antibody conjugate are only induced when it is bound to an antigen on the membrane of the targeted cancer cell and irradiated with NIR light. The cell membrane is thought to be physically damaged upon irradiation with NIR light, which ultimately leads to cell death. The dissociation of the axial, oxygen-bound ligands from IR700 has been shown to initiate cancer cell death, but the mechanism that brings this about has remained unclear.

Masato Kobayashi, Mikako Ogawa, Hokkaido University, Sapporo, Japan, and colleagues have investigated the Si−O dissociation reaction mechanism after NIR irradiation of IR700, using density functional theory (DFT) calculations in addition to experiments. The team found that the direct Si–O dissociation is difficult to activate with NIR light due to a high dissociation energy even in excited states. Instead, NIR irradiation generates the IR700 radical anion. This leads to acid‐base reactions with nearby water molecules, which participate in ligand release.

These insights suggest that light might not be required for ligand dissociation, as the formation of the IR700 radical anion is sufficient. This might allow the use of PIT in deep-tissue cancers without invasive methods, provided that the radical cation can be formed in situ.