Porphyrins can be used as light-responsive drugs for photodynamic therapy (PDT). PDT uses light and a photosensitizing chemical substance together with oxygen to cause cell death. Radioactive gallium-68 can be used to produce a positron emission tomography (PET) signal for imaging. PET uses radioactive materials as tracers, which are trapped within the tissues of interest and emit positrons. The positrons combine with neighboring electrons to produce γ-rays, which can then be detected. Combining a porphyrin derivative and gallium-68 in a single agent could improve cancer treatment.

Ross W. Boyle, University of Hull, UK, Aline M. Nonat, Université de Strasbourg, France, Graeme J. Stasiuk, University of Hull and King’s College London, UK, and colleagues have found that gallium-68 can be complexed by a five-coordinate bispidine-type ligand (pictured on yellow below), producing a highly stable complex. According to the team, this is the first time the bispidine class of chelating ligands has been used for gallium-68. The bispidine chelator was attached to a water-soluble porphyrin (pictured on red below) via an amide bond formation involving its terminal lysine residue. 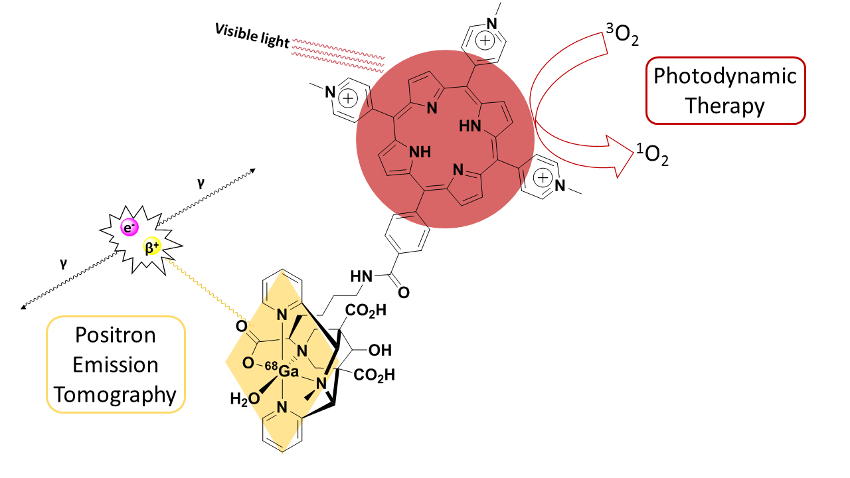 Following the complexation of gallium(III) ions, the team analyzed the conjugate using UV-vis and NMR spectroscopy. They found that the gallium was not incorporated into the porphyrin, but solely bound to the bispidine ligand. Toxicity studies showed the combined imaging/therapeutic agent could kill cancer cells when exposed to light, but has low toxicity in the dark. Overall, this work could be useful for the development of new PET/PDT theranostic agents using porphyrins and bispidine ligands.