Yeast-derived β-glucan particles (GPs) are good delivery vehicles for various kinds of drugs and have an affinity for immune cells. GPs could be used to create contrast agent carriers for magnetic resonance imaging (MRI) that can specifically target macrophages—a type of white blood cell and part of the immune system. The ability to deliver drugs and contrast agents to immune cells simultaneously could be an important theranostic application of GPs. However, encapsulating low-molecular-weight drugs and hydrophilic imaging agents is difficult due to the porous nature of GPs.

Janet R. Morrow, University at Buffalo, State University of New York, Amherst, USA, and colleagues have investigated the use of GPs as delivery vehicles for three macrocyclic high-spin iron(III) complex MRI contrast agents, Fe(TOB), Fe(TOD) and Fe(TOT) (pictured below). The cationic nature of these complexes enables their encapsulation into GPs (which are negatively charged) without additional functionalization. Such cationic contrast agents are unusual: commonly used GdIII‐based MRI contrast agents are typically anionic or neutral. The glucan particles were obtained from yeast cell walls and loaded with the contrast agents in a buffer solution. 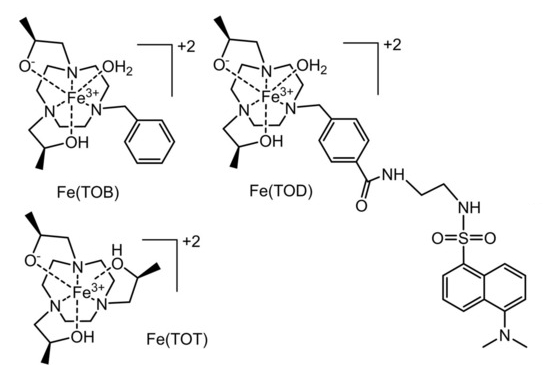 The interaction between the contrast agents and the GPs may involve coordination bonds or electrostatic interactions with the β-glucan particles. It is reversible under mild acidic conditions or in the presence of a bidentate maltol chelator, releasing the iron(III) complex from the GPs. According to the researchers, the facile encapsulation of iron(III)-based MRI contrast agents into GPs is promising for the development of theranostic approaches for immune system cells.