Photocatalysts can be used for sustainable chemical reactions. Catalysts that can be used under visible light are particularly promising because they can utilize natural sunlight instead of high-energy UV irradiation, which has safety risks and can promote side reactions. One of the most common photocatalysts is titanium dioxide, which is non-toxic and widely available. However, it only uses a small percentage of the sunlight’s energy, which reduces the efficiency of the catalyst. Photocatalysts that can harness a larger proportion of the energy of visible light would be useful.

Ruaraidh D. McIntosh, Heriot-Watt University, Edinburgh, UK, and colleagues have synthesized a series of bimetallic TiIV amine bis(phenolate) complexes that can be used as homogeneous photocatalysts. The catalysts feature “TiO2-like” units (Ti−O and Ti−O−Ti groups). The team first synthesized four different amine bis(phenol) pro‐ligands via double Mannich condensations. The corresponding TiIV complexes (pictured below) were then prepared either through the deprotonation of the pro-ligands with NaH, followed by the addition of TiCl4 (for C1, C2, C4, and C5), or via the direct addition of Ti(OiPr)4 (for C3). These complexes show an improved absorption of visible light compared with traditional TiO2 catalysts. 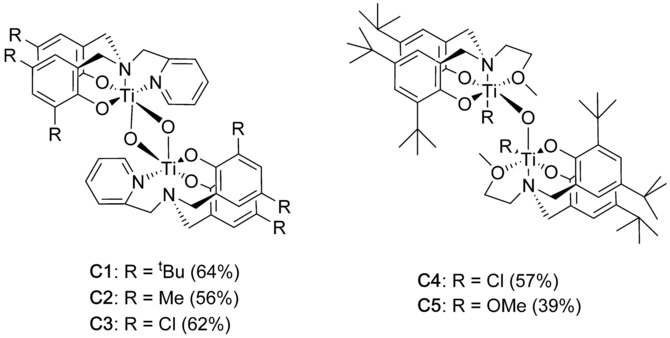 The team tested the complexes in the photo-oxygenation of α-terpinene (pictured at the top). The experiments were carried out in a flow reactor to enhance reactant mixing and light penetration into the solution. The researchers found that the reaction proceeds with high catalytic activity and selectivity using visible light. The reactions were performed under significantly milder conditions than traditional approaches, which involve UV radiation and elevated temperatures. According to the team, this is the first time that dinuclear, homogeneous, “TiO2‐like” titanium complexes have been studied as photosensitizers under visible-light irradiation.