The fullerenes, all-carbon spherical or spheroidal polyolefin materials, continue to draw the interest of researchers almost three decades after their discovery. Florian Beuerle, University of Würzburg, Germany, and colleagues have used a covalent organic cage as a shadow mask. This allows the team to regioselectively functionalize different parts of the surface of the archetypal fullerene C60, also known as buckminsterfullerene, and its chemical cousin C70.

The team’s trigonal-bipyramidal covalent organic cage compound can host either of the buckyballs C60 or C70, forming 1:1 complexes with each. Evidence for these structures was obtained using various spectroscopic techniques as well as X-ray crystallography.

Since their first demonstration in the early 1990s, fullerenes have drawn a lot of attention from chemists and other scientists searching for applications in, e.g., medicine, photovoltaics, and organic electronics. Various synthetic approaches have been used to functionalize the “curved” double bonds of the buckyballs, including the classic Diels–Alder reaction. The reactions can be driven by the inherent strain in those double bonds, which are constrained to the spherical or spheroidal geometry of the all-carbon cages.

Of course, if a single double bond is modified, then a single adduct is the result. Add a second functional group, and it has various places it could land relative to the first group, giving eight possible bis-adducts. With three groups, there are already 46 possible configurations for tris-adducts of [60]fullerene.

The ability to control fullerene functionalization could open up a whole new area of materials science with dendritic systems, extended metal-organic materials, and supramolecular frameworks. However, the addition of multiple functional groups to fullerenes needs control if it is to be anything but random. Statistics and kinetics generally govern the final adducts when multiple units are being added. The researchers have taken a step to control such reactions that goes beyond the simple tethers used by earlier researchers in their efforts to align the functional groups and place them at key points on the surface of a buckyball. 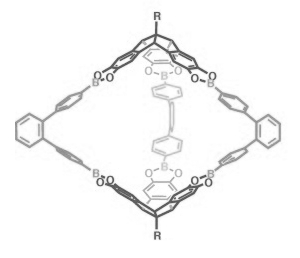 The team has used the unique orthogonal arrangement of the three aromatic wings in hexahydroxy tribenzotriquinacenes (TBTQs) to build various covalent organic cage compounds (example pictured on the right). By varying the bite angle of the diboronic acid reagent used in their syntheses, they could make various different structures with this basic approach.

The researchers were able to construct trigonal-bipyramidal, tetrahedral, and cubic-shaped cages with diameters between 1.9 and 3.5 nm. When buckyballs were exposed to solutions of these cages, the host cages take up the buckyballs, according to the team’s spectroscopic data.

The team then used their cages to direct two of the most well-known exohedral reactions used to functionalize buckyballs beyond the Diels–Alder reaction, namely, the Bingel and Prato reactions. The Bingel reaction is a cyclopropanation reaction for fullerene substrates. The Prato reaction gives N-methylpyrrolidine derivatives via a 1,3-dipolar cycloaddition of azomethine ylides to the fullerene’s double bonds.

For C60 inside the trigonal bipyramidal covalent organic cage, for example, only three distinct parts of the fullerene surface are accessible for functionalization. This allowed the team to obtain a tris-adduct that is formed only in trace amounts in reactions without the masking function of the cage. The cage can be easily removed after the reaction via a methanolic work-up.

“These exciting findings are the first example for a supramolecular control of the regioselectivity for the intrinsically nonselective Prato reaction. They will pave the way for novel applications of covalent organic cage compounds as effective templates for spatially precise reactions on large spherical π-systems,” the team concludes.