Single-molecule magnets (SMMs) are the smallest possible magnetic memory units. They could be useful for next-generation technologies such as quantum computers. The properties of an SMM stem from a perturbation of the electronic structure, in an effect called zero-field splitting (ZFS). The size of this splitting quantifies the magnetic anisotropy of the system. This parameter is notoriously difficult to evaluate by experiment, and scientists often rely on computation for its quantification.

Jacob Overgaard, Aarhus University, Denmark, and colleagues have determined the ZFS of the SMM (HNEt3)2[CoII(L2−)2] (H2L = bis(methanesulfonamido)benzene, anion pictured) using an approach based on single-crystal X-ray diffraction. They used high-resolution, low-temperature synchrotron diffraction data to obtain an experimental electron density (EED). This information can then provide d-orbital populations at the metal atom. The team showed that these are correlated to the molecular wave function. Using this experimental wave function, an estimate of the ZFS was calculated (workflow pictured below).

The approach provides an experimental expression for the molecular wave function, which is directly comparable to ab initio calculations. The results, thus, serve to bridge experiment and theory and provide information about the mechanisms that control the ZFS in SMMs. 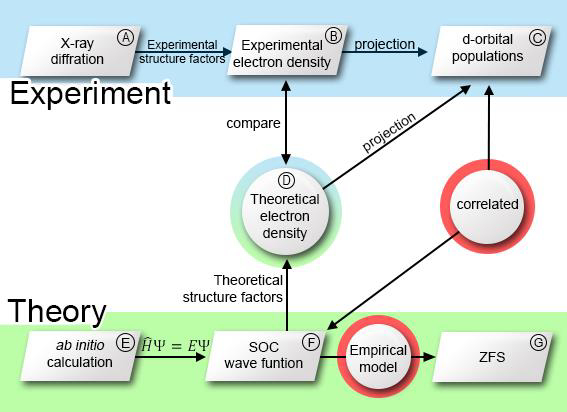