Industrial ammonia production is currently dominated by large, natural-gas-fueled Haber-Bosch plants, which can be difficult to electrify and produce large amounts of CO2. Small, distributed ammonia plants running on local renewable energy could be game-changers for a future with reduced CO2 emissions.

Johan A. Martens, KU Leuven, Belgium, and colleagues have developed a new process that is suitable for such a distributed, small-scale production of ammonia. The process, called PNOCRA (Plasma Nitrogen Oxidation and Catalytic Reduction to Ammonia), combines nitrogen oxidation using plasma technology with exhaust-gas purification technology from the automobile sector. Plasma converts N2 and O2 molecules from air into nitrogen oxides (NOx), which are collected by adsorption and periodically reduced to ammonia using “green” hydrogen (overall process pictured below). 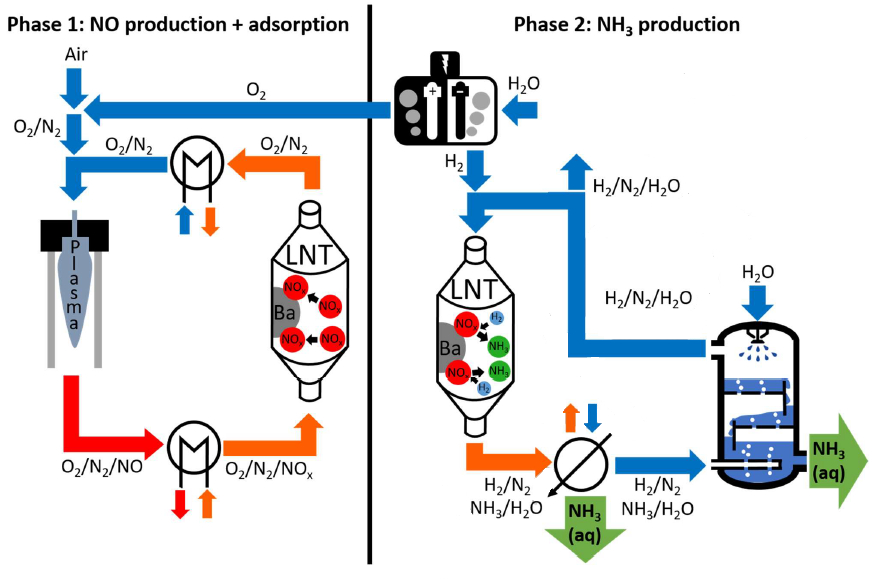 The energy requirement of PNOCRA is significantly lower than for the state-of-the-art plasma-based NH3 production directly from N2 and H2. The PNOCRA process is an example for the rapidly evolving field of plasma catalysis and is particularly attractive for the local production of nitrogen fertilizers for agriculture.