Professor Swadhin K. Mandal, Indian Institute of Science Education and Research, Kolkata, is the 2020 recipient of the Friedrich Wilhelm Bessel Research Award from the Alexander von Humboldt Foundation of the German Federal Ministry of Education and Research and the 2018 recipient of the Shanti Swarup Bhatnagar Prize in Chemical Sciences, one of the highest multidisciplinary science awards in India.

Here he talks with Dr. Vera Koester for ChemistryViews about his research on metal-free catalysis, his research ambitions, the state of research in India, and what makes a good researcher.

What inspires your own research?

I think the most fascinating aspect of my research is the fact that we are working hard to make those catalytic transformations metal-free which have long been believed to be impossible without transition metals. Organometallic chemistry has taught me to think about how a transition metal functions in a typical catalytic cycle through its redox switching behavior and inspired me to mimic that function without the use of transition metals.

Can you say a bit about your research?

We have developed ways to perform such C–C cross-coupling reactions without transition metals. One of the partners in such coupling reactions is an aryl halide, which is activated in the first step of the catalytic cycle by a metal-based oxidative addition reaction. Performing such a process without transition metals at ambient temperatures is extremely challenging. In a recent strategy, we have demonstrated the activation of aryl halides for direct C–H arylation of arenes and heteroarenes under transition metal-free conditions. An odd alternating aromatic hydrocarbon based on a phenalenyl molecule was converted to a super electron donor by double chemical reduction, converting a 12-π electron species to a 14-π electron species in a stepwise manner.

The strategy uses the non-bonding molecular orbital of phenalenyl, which can accept two electrons without significantly compromising aromaticity. After consecutive electron acceptance, it accumulates a sufficiently high amount of energy to promote a single electron transfer process to the LUMO of aryl halides. Such an electron transfer to an aryl halide leads to its activation and generates a highly reactive aryl radical, which further reacts with arenes/heteroarenes. Such a method does not require a continuous supply of electrons (by cathodic or chemical reduction or light irradiation) and works under ambient conditions.

A dream. A dream that someday transition-metal-free catalytic processes will replace the existing heavy-metal-based processes. For the sake of sustainability, many of us must pursue such dreams, otherwise we will destroy our environment and possibly create more pandemics.

That is true.
What are your views on the current trends in organometallic chemistry and the direction the field will take in the future?

It’s no longer surprising to synthesize compounds of P+, B+, C2+, B0, Si0, Si+, Si2+, Bi+, Ca+, Mg+, and many more. Maybe fifteen years back, we could not imagine that many such species would be part of our laboratories … well, some of them had been detected in interstellar space but not isolated in laboratories. Many such low-valent, main-group species are just reactive enough to activate various small molecules, which is primarily considered a hallmark of the transition metals. This is going to be a tremendous achievement if one can integrate such small-molecule activation into a catalytic cycle in which the low-valent, main-group element will switch its oxidation states back and forth to regulate the catalytic cycle. Take N2 fixation or catalytic CO2 reduction as an example.

I know I am being dangerously optimistic, but we are not too far from achieving such processes in industry that make use of low-valent, organo-main-group species and avoid transition metals completely.

And what does the future hold for chemistry in India?

The future of chemistry in India is just brilliant. The Indian chemical community is undergoing a revolution where my younger colleagues are just as aptly trained to take on and deal with challenging problems as their senior counterparts. You can see that the Indian chemistry community is publishing in top-class journals more often; these even include such highly regarded journals as Nature and Science. This is also reflected in the recognition of various Indian chemists at the international level. Many of them are now serving as Associate Editors or Editorial Board Members on many prestigious journals.

This certainly marks a positive change from the time when I did my Ph.D. in India, and it is certainly a good sign for Indian chemistry. Needless to say, this has largely been possible through the enormous support of the Indian government and the tireless efforts of the senior chemists in India and their enthusiasm to encourage their younger colleagues.

You have worked at universities in India, the US, and Germany. What are the main differences between these countries?

Every country is different in its culture, work habits, or political ideology. But as far as chemistry is concerned and how research problems are dealt with, I found tremendous synergy and similarities. However, I must admit that I learned many good habits during my time in the USA and Germany on how to effectively use my time, be organized, and pursue theme-based research.

How do you become successful as a researcher? Is it curiosity and skills? Or does it come down to funding?

It is your state of mind. Success depends on whether you are doing what makes you excited in life. If your subconscious mind wants you to be a successful researcher, then you are going to be, because it depends on how much you yourself are engaging with your research. How much your mind is thinking about it has a bearing on your results. If someone is not excited about research, then they should not pursue it, and the same thing probably applies to anything in life. Curiosity and skills will follow your mind. Funding is, of course, necessary to do research. But that is secondary.

The freedom of changing which research problems I pursue while keeping my goal fixed, feeling young while learning new things, traveling around the world, and meeting many people across the globe.

What is your philosophy of life?

Almost four years ago, I lost my wife, who had been my closest friend. I realized that life can be turned upside down at any moment. To describe my philosophy of life, I prefer to borrow words from Mahatma Gandhi: “Live as if you were to die tomorrow. Learn as if you were to live forever.” So don’t wait. Just start doing something you love to do.

What advice would you give to up-and-coming scientists?

I would prefer to say:
If you work, someone may find fault,
If you publish, someone may destructively criticize,
If you succeed, someone may try to pull you down.
Give those “someones” a sweet smile and forget them. Live your life the way you want to.

I do not know what will happen ten days from now, but I can certainly dream of where I want to be. Ten years on, I hope to see myself doing something that is benefitting many people. I dream of creating more resources from less to help more people, using the knowledge and skills I have to deeply benefit our society.

In my spare time, I love cooking for my teenage daughter. She thinks I am the greatest cook in the world. (I took the liberty of saying that without her consent!) I also like fishing and dreaming of holidays in a pristine place. 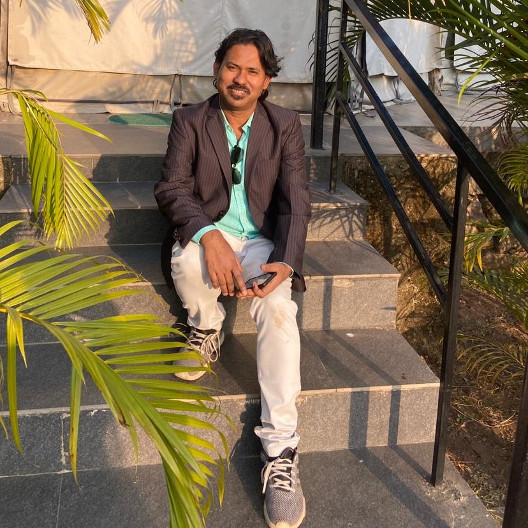 Swadhin K. Mandal studied chemistry at the University of Kalyani, India, from 1990 to 1996, and received his Ph.D. from the Indian Institute of Science, Bangalore, India, under the supervision of S. S. Krishnamurthy. From 2002 to 2006, he did his postdoctoral studies at the University of California, Riverside, USA, in the laboratory of Robert C. Haddon and was an Alexander von Humboldt Postdoctoral Fellow with Herbert W. Roesky at the University of Göttingen, Germany, from 2006 to 2007.

From March 2018 to August 2020, he served as the Head of the Department of Chemical Sciences. He is a visiting professor at the Indian Institute of Technology Bombay (IIT Bombay) until 2022. Currently, he is a member of the editorial advisory board of the journals Chemical Science and Inorganic Chemistry.