Metal–organic frameworks (MOFs) are porous materials composed of organic ligands and metal centers. They can, e.g., be used in host–guest chemistry. When macrocycles are used as organic ligands, the resulting MOFs can potentially recognize relatively large molecules.

José Berná, University of Murcia, Spain, and colleagues have prepared copper(II)- and zinc(II)-based MOFs with macrocyclic linkers and large pores, named UMUMOFs. The MOFs were synthesized under solvothermal conditions using copper nitrate or zinc acetate together with a flexible benzylic polyamide macrocyclic ligand functionalized with two carboxylic acid groups. This ligand (pictured below) was prepared using a three-step protocol involving a coupling of p-xylylenediamine and methyl-3,5-bis(chlorocarbonyl)benzoate in the presence of a tetraalkylfumaramide as a template, followed by thermal treatment in the polar solvent dimethyl sulfoxide (DMSO) to remove the template and, as a final step, a saponification of the ester groups. 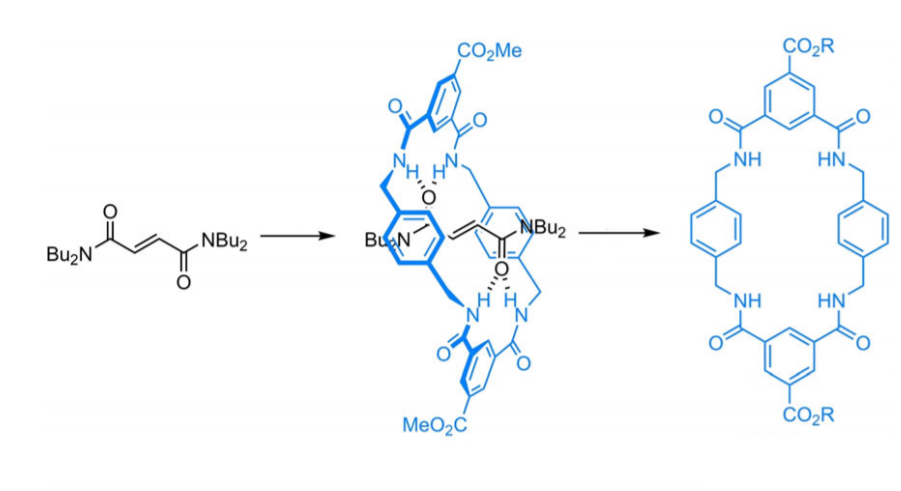 The UMUMOFs have cavities that can accommodate fullerene C60 (pictured at the top in yellow). Up to 98 % of the MOF cavities are occupied at full absorption, creating a host–guest network in which the fullerene makes up 34 wt%. The MOFs have a higher selectivity for the smaller C60 buckyball compared with the larger fullerene C70 (pictured in blue), which have relative van-der-Waals radii of 10.4 and 10.9 Å, respectively. After three cycles of uptake and release of a 40:60 C60:C70 mixture using the copper-based UMUMOF, a pure C70 solution was produced. According to the researchers, the MOFs could also be useful for the recognition of other large molecules.