The presence of carbon dioxide and organic acids in the atmosphere underlies its acidity. The presence of substances such as formic acid triggers the nucleation of cloud droplets that ultimately fall as acid rain. Organic compounds in the gas phase play a key role in atmospheric oxidation reactions.

Bruno Franco, Forschungszentrum Jülich, Germany, and Université Libre de Bruxelles (ULB), Brussels, Belgium, Domenico Taraborrelli, Forschungszentrum Jülich, and colleagues point out that our current models of atmospheric chemistry and climate “greatly underestimate the atmospheric burden of formic acid”. They explain that the basic processes that lead to the formation of formic acid in the atmosphere are not fully understood, nor are the ways in which this organic acid is lost from the atmosphere—i.e., the nature of its sources and sinks.

It is known that chemical production is the dominant source of formic acid in the atmosphere, as opposed to there being a natural, industrial, agricultural, or other sources of emissions. Emissions of the compound itself from ground level perhaps account for about 15 % of the load. A likely source of the acid is the photochemical degradation of volatile organic compounds that are released by plants.

Formic acid can last for just two to four days in the atmosphere before it is degraded. However, this lifetime is extended by an order of magnitude in cloudless regions of the troposphere, the lowest region of the Earth’s atmosphere.

“The model globally underpredicts the satellite columns by a factor of two to five,” the team states. They add that similar inconsistencies are seen between the simulations and ground-based Fourier transform infrared (FTIR) columns that have been carried out at various latitudes. “These persistent discrepancies point to substantial unidentified sources of atmospheric formic acid,” the researchers say.

Atmospheric scientists have attempted to balance the carbon budget with regard to formic acid by looking for enhanced emission of the substance and its precursors. They have also hypothesized that there may be other chemical pathways with a range of different precursors and intermediates that may come from plant life.

To reconcile the carbon budget, the researchers carried out atmospheric chamber experiments in which they demonstrate how formaldehyde can be efficiently converted into gaseous formic acid through a convoluted chemical route that passes through the hydrated form of formaldehyde. They point out that only in warm cloud droplets does this intermediate undergo “fast outgassing” and “slow dehydration” to form gaseous formic acid.

The commonly assumed route to atmospheric formic acid is, the work suggests, boosted significantly by a gas-phase oxidation that creates a chemical gradient that drives methanediol from the aqueous to the gas phase (pictured below). Methanediol is formed in cloud droplets via the hydration of formaldehyde. This is followed by an oxidation that generates formic acid via a reaction with OH radicals. It had previously been assumed that most methanediol would instantaneously dehydrate to reform formaldehyde before it volatilizes—thus, it had not been accounted for correctly in earlier models.

The current research decisively shows how methanediol can help account for the observed abundance of formic acid. This, in turn, explains part of the acidity of the atmosphere itself, an important factor in atmospheric chemistry and cycles that has effects on climate, the oceans, and soil. 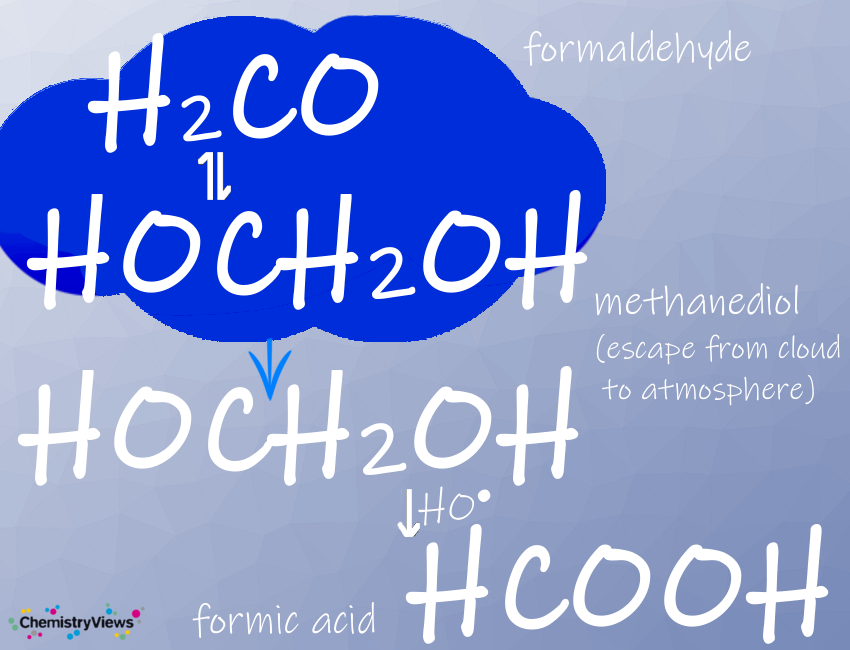 The researchers add that two other compounds, glyoxal and methylglyoxal, will most likely turn out to be important in explaining the levels of two other organic acids, oxalic and pyruvic acid, in the atmosphere—analogous to the chemistry of methanediol. “Understanding these multiphase processes advances our knowledge of atmospheric reactive carbon oxidation chains and of chemistry–climate interactions,” the team concludes.